The Aruamu people’s desire to have the full Bible in their heart language birthed a creative, one-of-a-kind strategy. 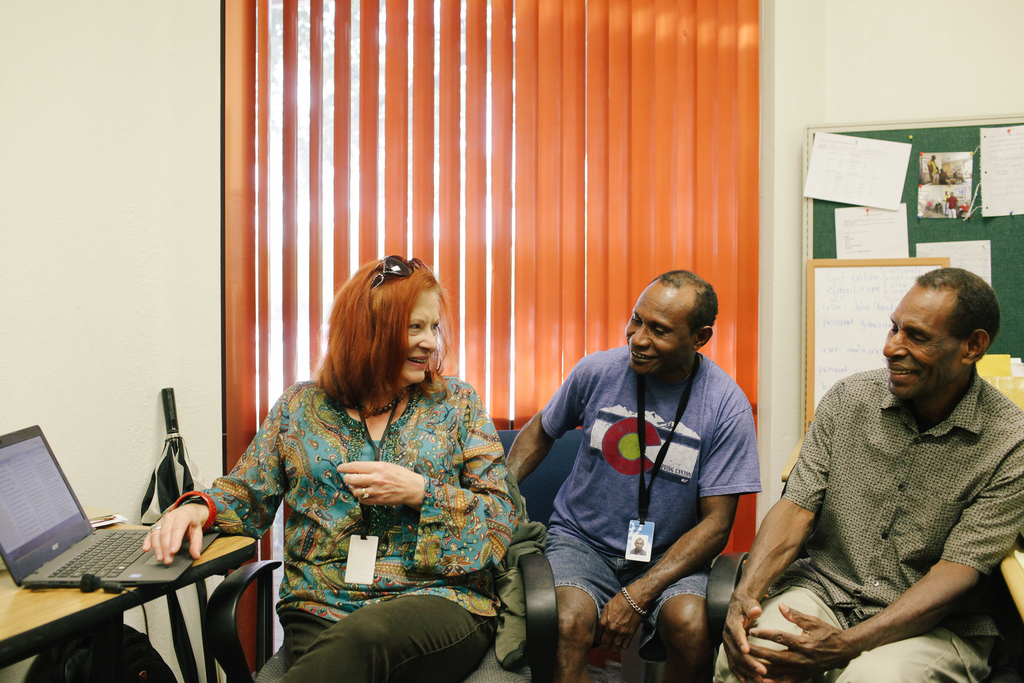 Francis Dagonov and Simon Aroro work with Marsha Relyea Miles to assure that the Aruamu translation faithfully conveys the message of the original Hebrew text.

Francis and Simon are a long way from home. They traveled to Dallas from their small village in Papua New Guinea to help complete the translation of the Bible into their heart language. But why are they working in Dallas?

“John and I lived among the Aruamu from 1986 to 2004,” explained Marsha Relyea Miles, translation advisor for the Aruamu. “We learned the language, developed an alphabet and literacy materials, trained teachers, and translated the New Testament. But John died in 2005, just before the New Testament dedication, and our whole world changed.”

Having the New Testament whetted the people’s appetite to have all of God’s Word in their heart language. Yet they didn’t know how that could happen without John and Marsha to continue in the key roles each had filled. “John was really good at checking the translation in the community and doing a lot of other things,” Marsha noted. “But the Aruamu people really stepped up and began managing their own project.”

Francis agreed. “The team has grown to nine Aruamu Bible translators and 30 people who test the translation in the community.”

Marsha’s specialty on the team is exegetical checking—verifying that each translated verse is consistent with the original Hebrew. She began making two or three trips each year from her home in Dallas to Papua New Guinea to do this. “By 2015 our team was a well-oiled machine and we were making steady progress. But we had a problem. At our current rate, we calculated that it would take 12 or 13 more years. We didn’t have that much time! We wanted to finish before we were all walking around with canes.”

“At our current rate, we calculated that it would take 12 or 13 more years. We didn’t have that much time!”

The bottleneck was exegetical checking. After much prayer for direction, the team developed a creative—and rather unorthodox—solution. The local team would continue translation, comprehension checks, and Scripture impact initiatives in their villages. But for exegetical checks, Marsha would stop going to them for a few weeks at a time. Instead, each year the team would send two translators to Dallas to work with her full-time for six months. They would come during rainy season when their families were not dependent on them to plant crops.

This innovative solution to accelerate their Old Testament translation is working. Since 2015, four pairs of translators have come and exegetically checked 19 Old Testament books. Francis and Simon plan to complete Leviticus, Deuteronomy, and 1 and 2 Kings—3,354 verses—during their six months in Dallas. One more pair of translators is scheduled to come next year to complete the remaining exegetical work.

Francis, a soft-spoken 60-year-old pastor, described some of the challenges he and his fellow translators face as they work in the U.S. “I feel like I’m lost here,” he said frankly. “The food is different, the people are different, the weather is different. And so is the culture, even how to mix with people and make friends.” Marsha explained that “in the village everyone already knows everyone; they don’t have experience with meeting new people all the time.”

Simon agreed with Francis. “The food is spicy here!” he laughed. He misses taro. Francis misses sago. “And we are not used to everyone moving so fast all the time. We are having to get used to the idea here that time is a valuable thing.”

Their journey to Dallas was challenging from the outset. They began by hiking three hours to the main road, riding in public transport for hours along a muddy road until they reached a washed-out bridge, hiring a canoe to cross the river, then finding more public transport to take them the rest of the way to the airport in Madang. From there, they flew to the capital, then to Australia, and finally to the U.S. on a 16-hour flight.

Francis expressed their commitment to the work despite the hardships. “I want the whole Bible to be in our language so we can learn God’s Word by reading it. People will understand without anyone having to explain. And preaching will be more effective.”

He smiled as he talked about his wife, seven children, and ten grandchildren. How will his children’s lives change once they have the whole Bible in their language?

“It will remind them that there is a God. They will see us, their parents, living by the Word of God, so the kids will do the same. And our tok ples—our language—will be preserved for generations.”