A Village Engages With the Words of Jesus 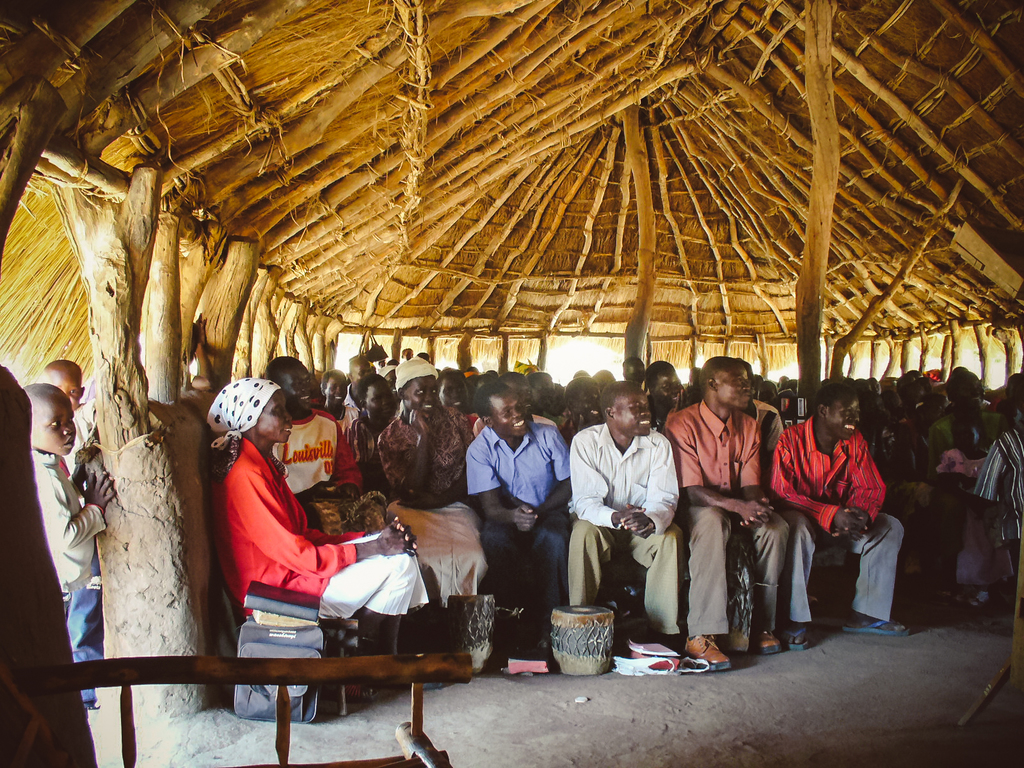 About 80 people sat staring intently at nothing in particular, their faces wearing that strange look of concentration that comes from straining with all their energy to hear a sound. Every person leaned forward to capture every word of the Sermon on the Mount as the voice of Jesus echoed through the grass shelter.

The only other sounds came from some sheep passing through the village and one three-year-old who just didn’t have the attention span to listen. All the other children in the crowd were more silent than I have ever before seen.

The village chief was present. Occasionally he nodded at a particularly poignant teaching. One of his advisors risked voicing assent a few times when Jesus hammered a point home, then quickly fell silent again to avoid missing even a single word that Jesus had to offer.

Several years ago we had recorded different people’s voices reading the whole New Testament in Yalunka. These recordings had been combined with music and sound effects, then programmed into solar-powered listening devices. Yalunka evangelists were taking these devices to nearby villages where people could hear the teachings of Jesus. We were already beginning to see people’s lives change as they heard and believed.

On this particular day my Christian Yalunka friend and I had walked to this village about a mile from my home. Like so many other Yalunka villages, this one had no church. We hoped and prayed that what happened today would create interest in forming a listening group to hear and discuss these Scriptures on a regular basis. Ultimately we hoped that, as God’s Word began to bear fruit in people’s lives, a church would be planted here.

As the final words of Matthew 6 were uttered, I wondered whether the people had really understood any of them. I didn’t have to wait very long to find out.

My friend opened the discussion by posing a simple question. “What part pierced your heart the most?” One village leader jumped right in. “You know, what He said about not doing your good works to be seen by people. That really hit home with me. Whenever we do something good, we announce it before a big crowd, but this Holy Book says that you won’t get rewards in heaven if you do it to be honored by people.” His words immediately prompted a lively discussion about this new idea of doing good works that only God knows about.

Another man said, “He also said not to pray in order to be seen by others!” Soon they were talking about how people make a big production of observing their religion’s month of fasting. Often they will leave a little patch of dirt on their forehead to show that they have been kneeling to pray with heads touching the ground. “This Book said you won’t get any reward from God for that. It said to wash your face and try not to let anyone know you are fasting.”

It was as if someone had confirmed a suspicion they had harbored for decades. Jesus’ words rang true.

This idea, so foreign to their own religious practices, didn’t seem to surprise them. Rather, it was as if someone had confirmed a suspicion they had harbored for decades, that there is something wrong with religion done for show. Jesus’ words rang true.

Then someone else offered an answer to my friend’s question. “That part about the eye being the lamp for the body. I could tell that was important, but I wasn’t quite sure what it meant.” After a discussion, they concluded that sin causes people to walk in the dark. That seemed pretty astute, especially coming from first-time listeners.

Pioneer Bible Translators utilizes numerous strategies for distributing Scripture in the variety of cultural and social contexts in which we serve. Audio Scriptures open the Word of God to those unable to read it for themselves and in cultures where people prefer to learn by listening rather than reading. They also serve as a resource for the group listening and discussion that are strategic to widespread acceptance of the Gospel in group-oriented societies. We distribute audio Scriptures on portable solar-powered devices as well as on SD cards, DVDs, flash drives and the internet. In places where Bibles cannot be openly distributed and read, downloadable audio and text files of translated Scripture provide spiritual nourishment to believers and seekers who will otherwise continue to go hungry. 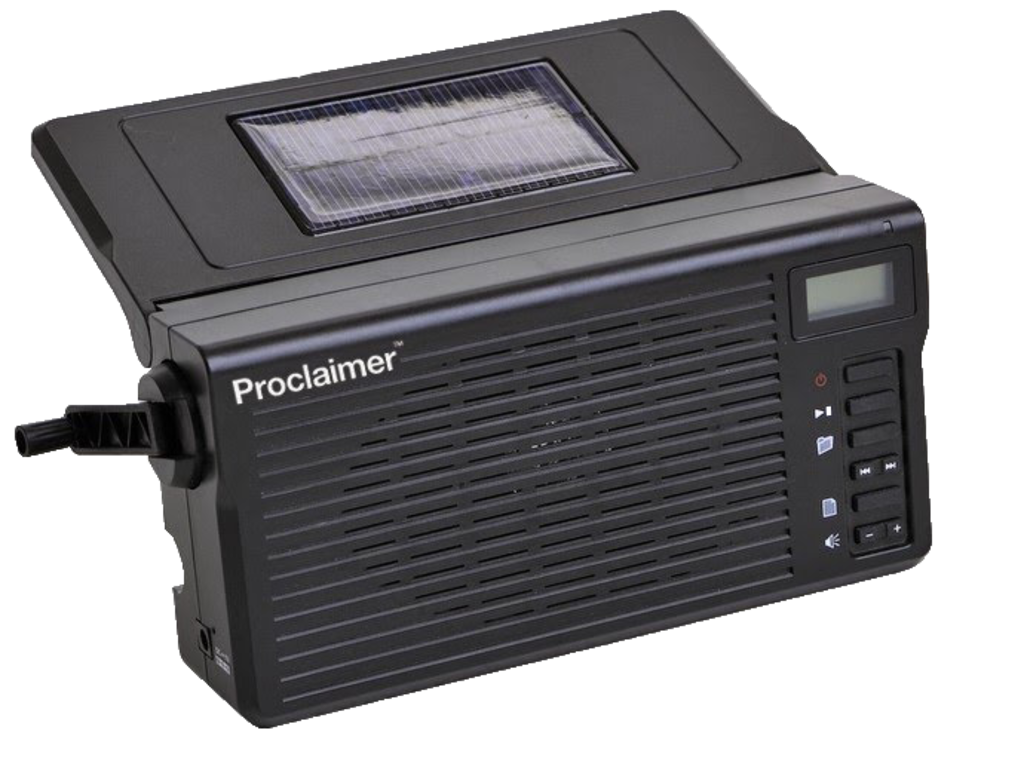 The Proclaimer™, provided by our partnering organization Faith Comes by Hearing, is a portable solar-powered device used for listening to dramatized audio Scripture.

“What else pierced your heart?” my friend prompted.

“Well, there was the part about not working for two masters,” one man mused. “That really made me think.” My friend responded by preaching a bit about corruption in leadership and the love of money.

When the conversation lulled, and I feared we might have overstayed our welcome, the chief gestured toward our audio player. “Are there any more words on that machine?”

We launched chapter 7 and immediately one of the men burst out laughing at Jesus’ quip, “Why do you see the speck in your brother’s eye when you have a log in your own?” That led to quite a lengthy discussion at the end of that chapter, complete with acting out with hand motions the log-in-the-eye syndrome.

When we finished talking about chapter 7, the chief motioned for us to let chapter 8 roll. The faith of the centurion really struck a chord with the village leaders. As men of authority, they seemed to latch onto that part of the story.

Then one of the listeners brought up the story of the demon-possessed men and the pigs. My friend asked, “When Jesus drove out the demons, was that a good thing or a bad thing?”

The crowd answered with one voice, “It was a good thing.”

“Then why did they ask Him to leave?” My friend took advantage of the opportunity to point out that many people fail to receive Jesus today even though they love His words.

We continued to discuss Jesus’ teachings as the sun gradually crept down toward the horizon. My friend taught every part of the Gospel he could think of, from the virgin birth to forgiveness of sins to holiness and a whole lot more.

“So, are you interested in hosting a listening group to hear and discuss more of these words of Jesus?” we asked expectantly.

The chief and his advisors walked us to the road so we could make our way home before darkness completely obscured the trail. As we walked they remarked, “Some of our children will enter into this religion.”

My friend soberly asked them the question that still haunts me at night, “Why would you see a good thing, want it for your children, but not want it for yourselves?” He pleaded with them to follow Jesus. They had no answer.

When listening to these dramatized Scriptures, nobody has said, “Hey, I know that voice!” even though they know every person who read for the recording. The music and the sound effects and the dramatic voices have combined to draw the listener into the story.

The Yalunka people have for the most part missed the whole first coming of the Kingdom of God until recently. But now, whenever we play these Scriptures for them, they get that quiet look of concentration. I have even found myself believing, when I have listened for a little while, that I am listening to Jesus Himself preaching in Yalunka as the words echo off the mud walls of village huts. It’s like Jesus has taken a detour through time to preach in our region on His way to Galilee. It’s like He has finally come to speak those treasured words just so the Yalunka can have their chance to hear, as they sit listening, quietly.