The Tay Church Uses Scripture to Grow, Mature and Multiply 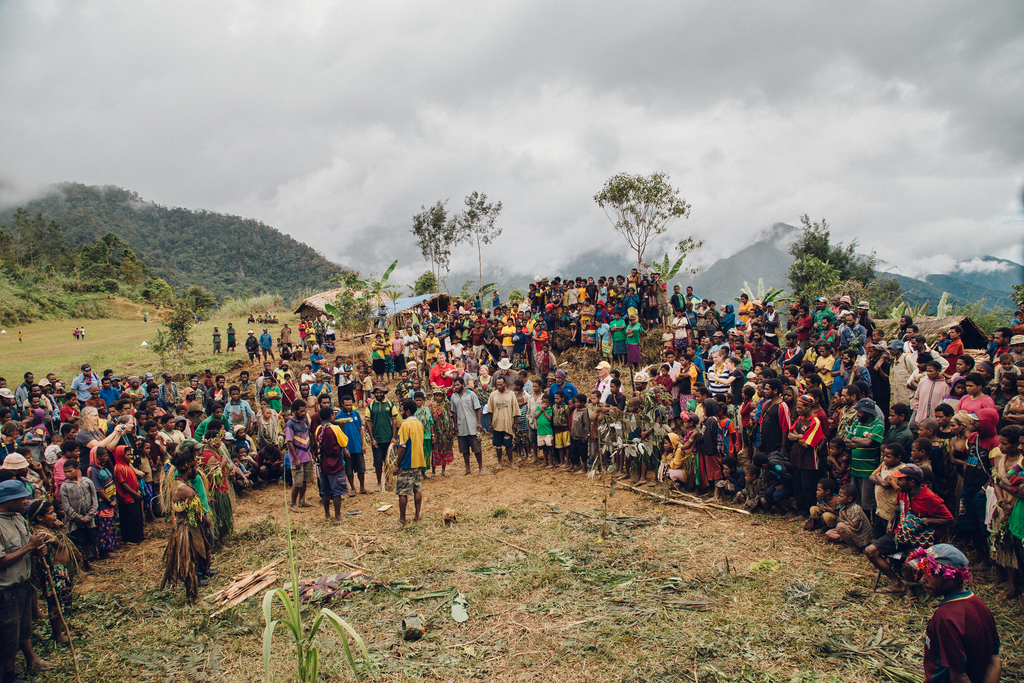 The Tay people celebrate receiving the New Testament in their heart language—the language in which they think, feel and dream.

Pioneer Bible Translators’ ministry among a people group is complete when they have a network of churches using Scripture to grow in number, mature in faith and multiply through evangelism.

Yuwolim gazed in awe at the book, gently running his fingers over the words on its cover. As one of the translators who had helped bring the Tay New Testament into existence, he had been anticipating this moment for many years. Holding his own copy for the first time, he opened it carefully and began reading. He only made it through a few sentences before his joy overflowed in laughter. “This is so clear! And it’s finished! After all these years, it is really finished!” 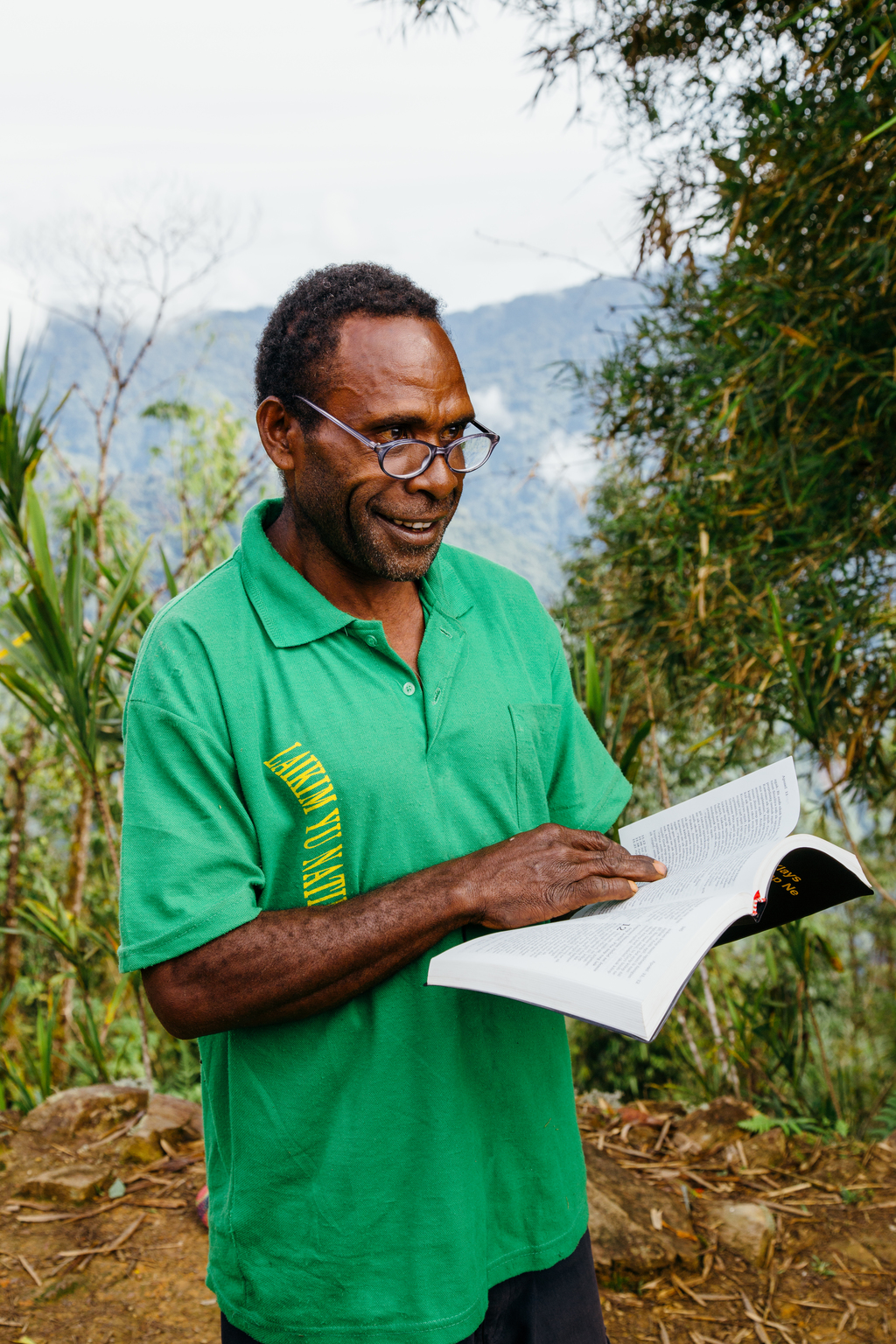 “This is so clear!” exclaimed Yuwolim as he read his Tay New Testament for the first time.

This landmark moment for Yuwolim was soon followed by a landmark day for his entire people group. July 17, 2014, was a day of kaleidoscopic color marked by unbridled exuberance and joy as the Tay people gathered to dedicate their New Testament. They sang songs and performed dramas composed especially for this day. Several people delivered emotional speeches. And they prayed, dedicating the treasured books for God’s glory.

Yuwolim’s reaction to reading his New Testament for the first time confirmed a foundational principle: Scripture has its greatest impact when people hear it in their heart language—the language in which they think, feel and dream.

TUCKED AWAY IN ONE OF Papua New Guinea’s rugged mountain ranges, the Tay people lived for centuries in virtual isolation from the outside world. They were first introduced to the Gospel by a traveling evangelist from Vanuatu in the early 1970s. Hungering to know more, they sent a young man named Gabriel to a Bible school, where he studied God’s Word and prepared to serve as a pastor. When he returned to his village a small church formed.

But the only Scriptures available to them were in Tok Pisin, a language most did not understand. So Gabriel translated Scripture texts orally into the Tay language as he taught. He did his best, but he knew that it was not enough. Aware of Pioneer Bible Translators’ work, the church leaders sent them a letter appealing for the gift of God’s Word. And the church began praying, “Oh, Lord, will You please send someone to translate Your Word for us?”

At the same time that the Tay church was praying, Steve and Rhonda Hayward were asking God to show them the people He desired them to serve in Papua New Guinea. God answered all these prayers by directing the Haywards to begin ministering among the Tay in February 1984.

“It has been a great joy for us to see first-hand the transformational power of God’s Word in the heart language of the Tay people,” Rhonda says. “God’s Spirit used the translated Word over the many years as it was finished—line by line—to transform lives.” A man publicly burned his collection of magic artifacts in bold testimony of his faith in God’s protection. A woman, convicted that she should no longer consult a sorcerer when her children became ill, asked to be taught what God’s Word instructed her to do instead. People from neighboring language groups commented that the Tay were becoming more peaceable. Little by little, transformation was occurring. 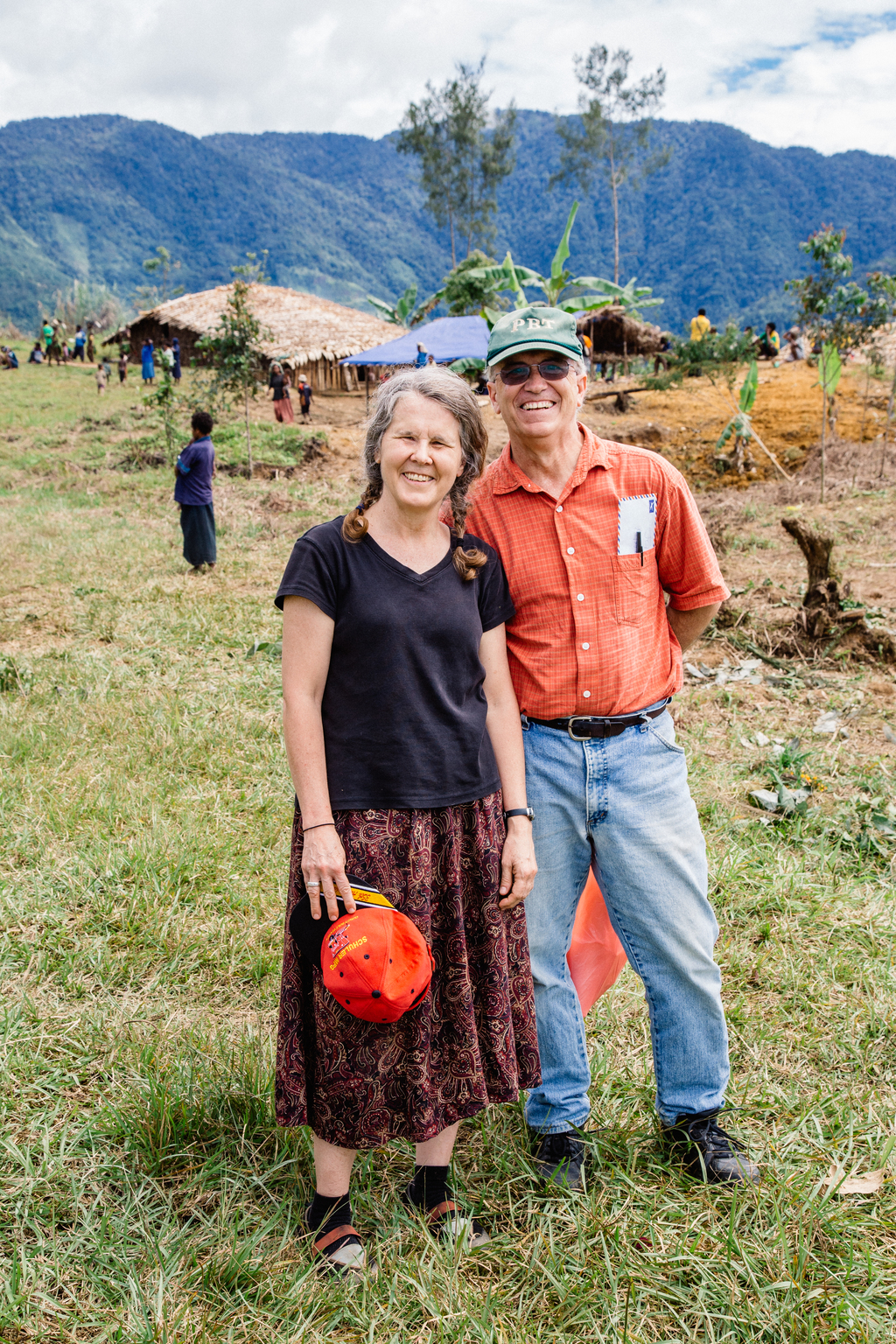 Rhonda and Steve Hayward lived among the Tay, translating God’s Word and modeling its impact on their own lives.

“THIS IS BIG TALK,” SAID one of the Tay leaders after hearing portions of God’s Word read in his own language. “We aren’t sleeping at night. We are staying up talking about what God’s Word is saying to us.”

Immediately following the New Testament dedication, a two-week intensive Bible course was conducted to equip local church leaders to study and teach from their mother-tongue Scriptures. Twenty-eight people attended this strategic study, which focused on several foundational truths: God’s character, spiritual warfare and principles of living as Christians in the broader community.

One key transformation taking place as the Tay engage with God’s Word is a release from fear. For generations, fear has controlled every aspect of Tay life: fear of evil spirits, fear of sickness, fear of sorcery, fear of death, even fear of a God they did not deeply know or understand.

“Fear covers the Tay people like a blanket,” exclaimed a young Tay mother.

Andrew, a pastor who hiked for two days to attend the course, agreed. In relating how he almost didn’t make it, he shared, “I was hiking alone through the jungle to come here, and I was afraid of the evil spirits in the jungle that might harm me. I almost turned back. Then I came to a flooded river and was afraid I might be swept away.”

Through the clarity of heart-language Scriptures, God is breaking apart these controlling fears. Andrew now knows, “My God is bigger than evil spirits and flooded rivers. I no longer need to fear, because God is with me.”

“I used to be afraid of drawing near to God,” a pastor named Lazarus testified. “Now I see how Scripture teaches that I am His child and can draw near to Him like a son.”

God’s Word is also giving the Tay a new understanding of His character and heart towards them. For years, many Tay Christians assumed God to be the same as the spirits they traditionally served. They felt that God, like the spirits, was volatile, temperamental and unpredictable. And they were never sure if they had appeased Him enough.

“I thought God was a god of wrath and anger,” testified Henson, another pastor. “But now I see that through Christ, God loves me and forgives me when I sin. Now I see how God wants me to love others—as He loves me.” 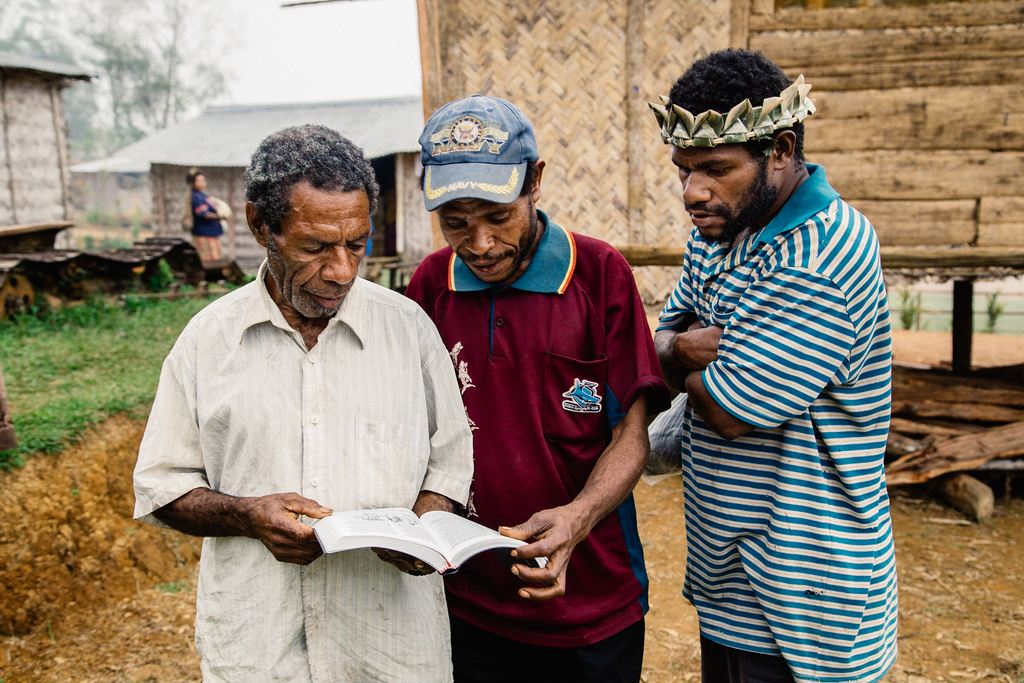 Gabriel (left), who continued to pastor a church while assisting with the Tay translation, pauses during the dedication day festivities to ponder a bit of God’s “big talk” with these young Tay men.

Even before receiving their completed New Testaments, another major change began taking place among the Tay people as they internalized and reflected on portions of mother-tongue Scripture. They began to tear down long-standing divisions drawn along denominational lines.

“These groups, for years, had little to do with each other,” Rhonda says. “At times they were openly suspicious of each other’s way of seeking God. These divisions have been slowly breaking down for years as men from both churches worked together on the translation and Scripture-checking teams. This unity has deepened even more since the dedication of the New Testament.”

One Sunday three Tay congregations met for a combined worship service. The back wall of one church building had to be pulled off and a temporary addition built so that members of the other churches could be welcomed in.

The Tay leaders shared how God had used Scripture to bring them together. They had seen clearly from Scripture how division is a tool of the enemy to cripple the work of the Church. Now the churches are regularly scheduling combined meetings.

AFTER DRINKING DEEPLY FROM SCRIPTURE in their own heart language, the Tay Christians are overcoming fear, growing in their understanding of God’s character and breaking down denominational barriers. They are growing in their faith, planting churches and reaching out to neighboring people groups. 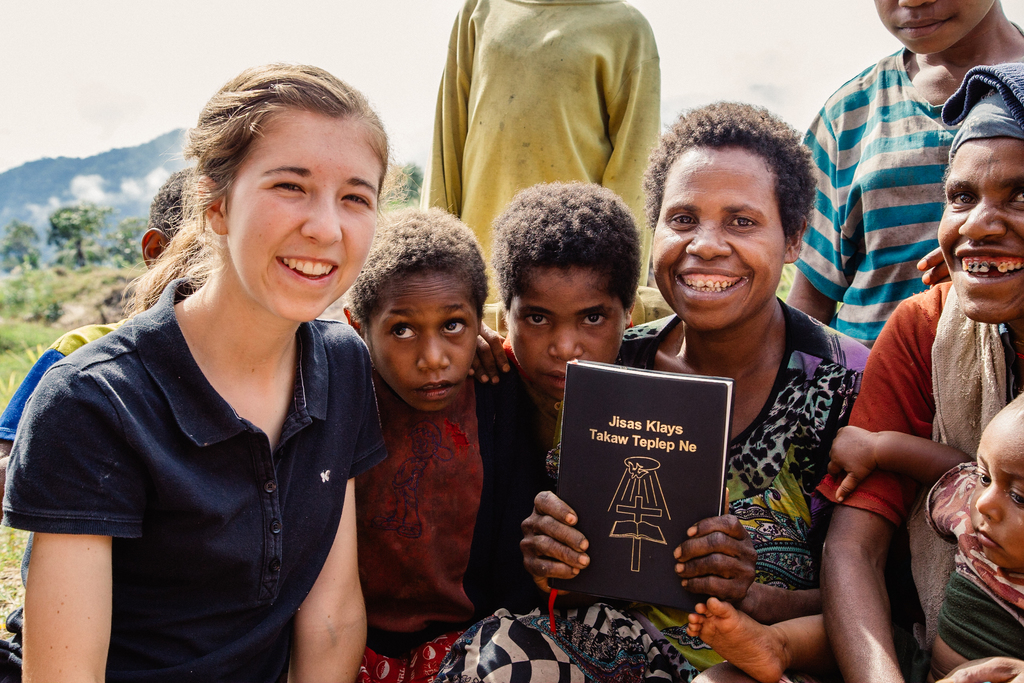 Women rejoice with missionary daughter Carissa Hayward, knowing that their children can grow up immersed in God’s Word.

Teams of first- and second-generation Tay Christians are going out to surrounding communities that speak dialects related to their own, sharing the truths they are learning from Scripture. One villager commented, “We are still living unchanged lives because we struggle to understand the Word. This teaching from the Word that you have brought has been extremely helpful. We believe that if you continue to come teach us these lessons from God’s Word, we will more clearly understand the Truth, and the Truth will set us free to live transformed lives.”

Truly God’s Spirit is using His Word to multiply believers and grow His Church in this place.

Pioneer Bible Translators considers its ministry among a people group complete only when there is a network of churches using Scripture to grow, mature and multiply. The Haywards, now based in the United States, still make occasional trips to the place that was their Papua New Guinea home for nearly 30 years. “It’s such a joy to see the Tay church continue to mature and grow in our absence,” Rhonda says. “God’s Word, eternally living and active, is transforming the lives of the Tay people for eternity.”

Yuwolim summarized it well as he looked up from reading his Tay New Testament and, anticipating the profound impact it will have, told Steve and Rhonda, “You and I will die, but this Book will be used by our children and our grandchildren until the day Jesus returns.”