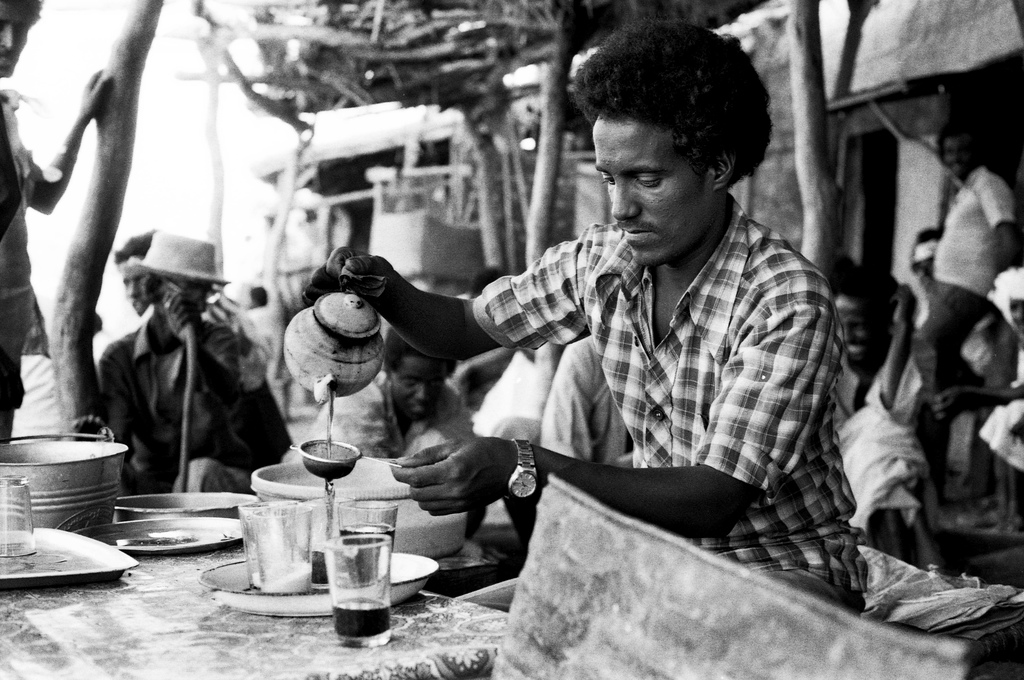 Tea drinking is an important ritual in African life, whether at a tea shop like this one in a bustling market or in the shade of a village mango tree.

The Friday afternoon heat was blistering. Nevertheless my husband Kirk set out on his usual walk around the village to meet, greet and try out his limited Gaba vocabulary. As he strolled through the village he spied a group of young men taking refuge from the heat in the cool shade of a mango tree. They had spent a long morning toiling in their rice fields. Now they were retreating from the unforgiving sun.

Kirk could hear that the young men were reading a religious tract published in French. Seizing an opportunity, he approached the men and quietly announced that the same stories they were reading were available in Gaba. He offered a trade: one tract in a language not their own for a manuscript of words that would speak God’s truth to their hearts in the language they understood best. Deal.

So began the weekly reading of a chapter from Dkcop da Doru—Creation of the World—the first 11 chapters of Genesis. The ritual became one of mutual benefit and rich learning: after taking turns reading a portion from Dkcop in Gaba, the men retold in French what they had just read. This helped deepen their reading comprehension in their language while also enabling Kirk to add words to his growing Gaba vocabulary.

Often these reading sessions included gunpowder tea, a strong black tea that, when combined with a generous heap of sugar, makes for a highly caffeinated hit that keeps the unsuspecting imbiber awake long past his usual bedtime. “Tea time” is a favorite pastime of village men, young and old. The preparation of the brew is something of an art, taking the better part of an hour to boil, mix and enjoy with loud, satisfied slurps. What better way to pass the wait time for tea, Kirk thought, than reading and talking about the Scriptures?

These reading circles have borne—and continue to bear—good fruit. Little more than a year after that first meeting under the mango tree, the men finished Genesis and began poring over the book of Luke. Their months of labored practice have made them proficient Gaba readers and teachers. They have started another almost-weekly ritual during the dry season: biking across rice fields and waterways to neighboring villages to conduct afternoon reading circles much like those they experienced themselves as new readers of their language.

The original reading group still meets on Fridays. Over gunpowder tea. Kirk may as well give up on the idea of going to sleep at a reasonable hour on those nights. But for transformed lives, what’s a little lost sleep?