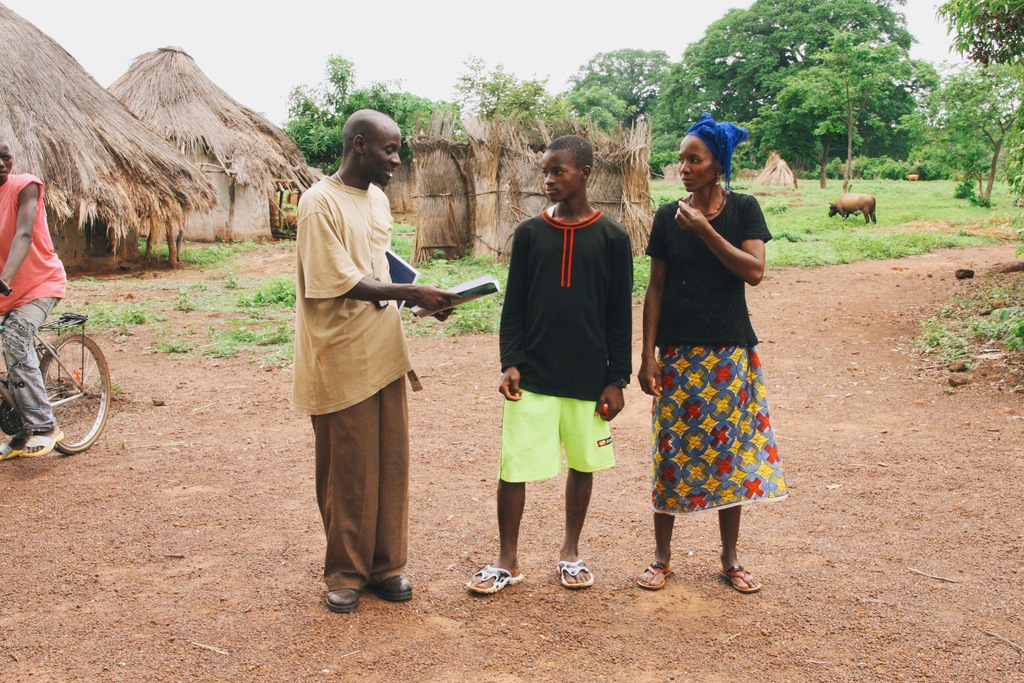 Formerly Bibleless, Yalunka believers are now reaching their own and neighboring people groups with God’s Word.

The small church gathered faithfully every Sunday. These 40 believers were the only known followers of Jesus among the Yalunka people in this West African nation. Despite their modest size they nurtured an enormous dream: to spread the Good News of salvation in Christ throughout their entire people group and beyond.

However, the Yalunka church was missing a key ingredient in the recipe for growth and impactful evangelism: heart-language Scripture. Although they prayed and preached in Yalunka, the only Scripture available to them was in a language only distantly related to theirs. They prayed for God’s Word in their own language so they could carry out their dream.

God had a plan to meet their needs for His Word. He began stirring the hearts of a young couple who were preparing to serve with Pioneer Bible Translators in West Africa. He led them specifically to the Yalunka and to the village of that small church with a big vision.

Greg and Rebecca Pruett settled into the rigors of living in a remote African village and began learning the Yalunka way of life and the language they spoke. Traditional beliefs and fears, coupled with the teachings and practices of the prevailing religion, dominated the people. As soon as they were able, Greg and Rebecca began working with a team of village men to translate portions of the Bible into Yalunka.

Response was immediate. People were amazed. Hearing God speak in their own Yalunka language was astonishing—and powerful. Four young men declared their faith in Jesus because “we heard about Him in our own language.”

As books of the Old and New Testaments were published, Greg and his African teammates distributed them. On one occasion he and an evangelist took a box of the Gospel of Luke to a large village. “A crowd of a hundred people gathered around the box and looked at it, but no one wanted to be the first to take one against the wishes of their village leaders,” Greg related. “So I pulled one out and began reading the genealogy of Jesus. I paused to emphasize the name of each person that they would recognize from their own holy books. As I read, I could see from their faces that they wanted one. When I finished reading the genealogy, one quick-thinking man walked over, grabbed a copy, and ran. Immediately 100 people hit that box at the same time. They fought each other to get Luke in their language. I have a vivid picture in my mind of the box ripping in half as a Scripture riot unfolded in about 30 seconds. When the box was empty, people who didn’t get a copy begged me to bring more.”

Immediately 100 people hit that box at the same time. They fought each other to get Luke in their language.

Greg and his team offered to meet with people to read and discuss the books of Scripture they distributed. In the village where the Scripture riot occurred, a small group of believers now meets regularly to learn how to follow Jesus.

The more people were able to use Scripture, the more the church grew. One partner organization, Faith Comes By Hearing, helped produce audio versions of Yalunka Scripture and provided solar-powered listening devices. This opened God’s Word to people who could not read it themselves and enabled large listening and discussion groups. Another partner produced a Yalunka version of the Jesus Film. As people saw it, and as they heard Jesus speaking in flawless Yalunka, some believed and chose to follow Jesus. The Kingdom of God was spreading.

Following Jesus in West Africa is not without cost. Many local people strongly oppose those who do. Leaders of the dominant religion exert pressure on those who stray from it. Persecution follows. It is common for a new believer’s wife and children to be taken away by his father-in-law. Believers are excluded from job opportunities and village leadership positions. Often their families won’t help them or their children get treated for serious illnesses. One man was marginalized in his family by being served meals with the dogs.

Yet the Word of God outlasts and overcomes persecution. A growing number of Yalunka are willing to suffer in these and other ways in exchange for the forgiveness and freedom they are finding in Christ, and they want others to have these gifts, too. The once small church is growing, and it is no longer alone. It has birthed a vibrant and growing network of churches that are themselves sending out evangelists and teachers to villages where Jesus is not yet known. Right now there are churches or small groups of people meeting and learning to follow Jesus in about two dozen Yalunka villages.

The Word of God has released great power among the Yalunka believers for fulfilling the mission of Jesus. They have sent out evangelists who are proclaiming the Good News in three adjoining unreached language groups with plans to begin reaching three more. They have established a school for training disciple makers, and agricultural development projects are helping provide the resources needed to fuel this missionary movement. They are even helping translate the Bible into a neighboring language to pass on the power of Scripture.

The Yalunka have gone from being Bibleless to having the entire Bible in the language of their hearts, and they are using these Scriptures to grow, mature, and multiply. Once they were a mission project; now they are partners in fulfilling the Great Commission in West Africa.

What a difference Scripture makes!