On Their Own Initiative

“When i think about the Mum people,” a Pioneer Bible Translators missionary reflected, “I think of the Parable of the Talents. Compared to other people groups in Papua New Guinea, the Mum are like the man who received only one talent. But unlike him, they refused to bury it.”

The Mum are a small people group with few resources. Their villages are tucked away in the tropical rainforest, so difficult to reach that they are easily overlooked in favor of larger groups with easier access. The Good News first came to this area many decades ago, and many of the Mum developed a fervent hope that they would one day have God’s Word in the language of their hearts.

From this hope arose persistent prayer that God would send someone to translate His Word for them. They began to see God’s answer in the early 1990’s when missionaries from Pioneer Bible Translators chose to work among them. 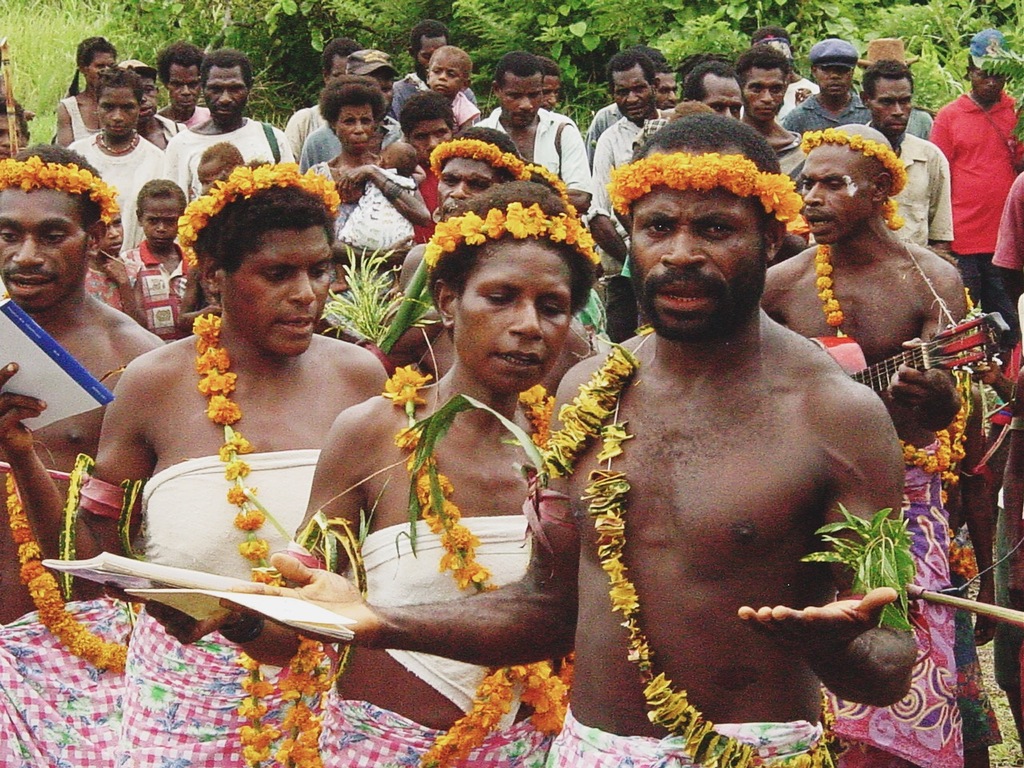 They dedicated the book of Mark with joy and awe. Could they overcome daunting challenges to continue translating God’s Word into their own language?

In the years that followed, the book of Mark was translated and published. The Mum people who worked most closely with the missionaries began to realize that translation was not exclusively the work of outsiders. Rather, it was a partnership. Working side by side, they drafted the books of Matthew, Luke, and Acts. As they worked, the Mum team members gained valuable experience, skill, and confidence.

Then, unexpectedly, the missionaries left. Representatives from the Mum people made the arduous trip to Pioneer Bible Translators’ office in the town of Madang to ask the missionaries there to send someone else to help them finish translating the New Testament. “We’re very sorry,” they were told, “but we have no one.” The missionaries encouraged them to do what they had done before: pray. They also challenged the Mum team to continue drafting Scripture on their own. As the men left the office, visibly disappointed, it was easy to assume that the translation work would cease.

The Mum had other ideas. They did not want to see all the hard work in which they had shared come to a halt. They sought God together, prayed, and discussed the future of the translation. Eventually they reached a consensus: With or without a missionary’s presence in their villages, they must continue this work.

They knew this would entail great sacrifice. In addition to translating without the guidance of trained linguists, they would have to bring their handwritten drafts to Pioneer Bible Translators’ office to be typed into a computer. The trip would take at least three days of travel, often four or five, on jungle trails, rivers, and treacherous roads. When they weren’t able to procure a timely ride, they would have to spend the night in the open by the river or the roadside.

The Mum did not want to see all the hard work in which they had shared come to a halt.

Despite these obstacles, the translators pressed ahead. By the middle of 2010, most of the New Testament had been drafted and the team was eager to begin the next steps. This would require new levels of sacrifice by the translators and their families. Until now they had worked primarily in their home villages. To continue, they would need access to resources available only at the office in Madang. They would have to spend several weeks at a time there, away from their families and from the work of tending the gardens that were their primary sources of food. While they were working in Madang, Pioneer Bible Translators would provide housing and basic food, and would cover their expenses for travel between village and town. Any other benefits would need to be provided by the Mum people themselves, on whose behalf the team labored. Could they—would they—continue on these terms?

Their answer was yes. Resoundingly yes! They began coming to Madang, sometimes in pairs and sometimes as an entire team. From the missionaries they learned to type and to use the Paratext Bible translation software. They learned to review their drafts and make corrections. They learned to produce back translations into Tok Pisin, a trade language of Papua New Guinea, so their work could be checked by advisors and translation consultants. As they worked their skills as translators broadened, enabling them to function more independently.

Without the Mum people’s passion and dedication, the Word of God would still be far beyond their grasp. However, because of the vision and determination of a handful of men and women, additional Scripture in the Mum language will soon be available. Much fruit is being borne from their willingness to persevere in the task of bringing God’s Word into their heart language. One day they will receive the Master’s commendation, “Well done, good and faithful servants!”