Persevering Through the Haze

By a missionary in North Africa 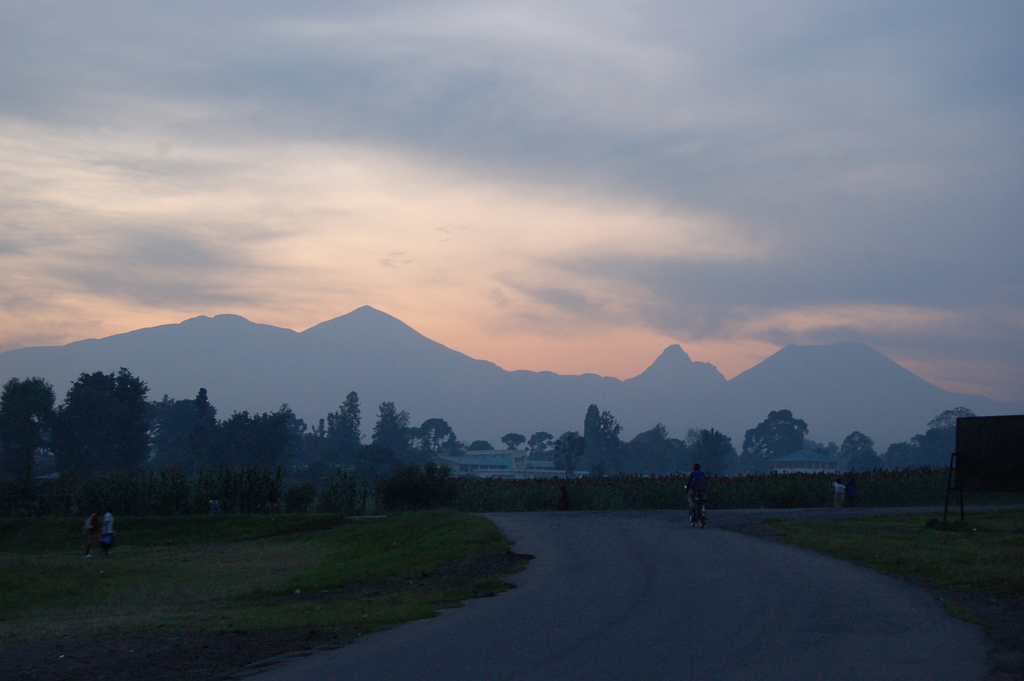 Caught in the crossfire between two rival groups, my husband Sean and I lay flat on the cold cement floor of our house with our three small boys. For eight hours we silently prayed through volleys of gunfire in the streets; during lulls in the fighting we hurriedly packed. Sean whispered updates into his cell phone to our director, who was arranging for a small plane to come evacuate us once the fighting died down.

Early the next morning we flew to a neighboring country, leaving behind the home we had built, most of our belongings, and all of our national friends and co-workers in our ministry of Bible translation among North Africa’s Vidilaka people.

In the days that followed I often stood at my window to watch the African sunrise, wondering in those quiet moments what God was doing. A mountain rose in the distance, beautiful and solid and real. Some days I could see God’s purpose and plan as clearly as I saw that mountain. But most days that beautiful vista was obscured by haze. Only faith, not sight, assured me that it was still there.

“Why is this happening?” I cried out to God on one of those hazy mornings. “How can we work with this people group without living among them?” The Vidilaka are so eager to receive God’s Word in their language. They already have some published portions, and they crave more.

“Why is this happening?” I cried out to God on one of those hazy mornings. “How can we work with this people group without living among them?”

God answered by bringing to my mind our last Sunday before the fighting erupted. The guest preacher was on a roll, and at the peak of the message asked for someone to read a passage of Scripture. An uneasy silence ensued. Finally, someone slowly raised a hand and quietly informed the guest, “We don’t have that part of the Bible in our language yet.”

The preacher locked eyes on Sean and me and pointed at our family: the two of us, our two small boys playing quietly on the dirt floor, and our four-month-old asleep in my arms. “This is why God has brought them here.”

Now, just a week later, we were displaced and scrambling to find a place to stay in the crowded capital city of another country. We only had a few suitcases; we’d been forced to leave everything else behind. The country we left was spiraling into civil war, with atrocities on the rise and no end in sight. We didn’t know when we could return—maybe never. Hadn’t God brought us to the Vidilaka? How were they going to get God’s Word?

Later we learned that the house we had built in a Vidilaka community had been completely looted. All of our hard work toward learning two languages—Vidilaka and another language widely spoken in that area—did us no good in our new environment. We had lost everything. Should we return to the United States?

As Sean and I continued to pray, God put on our hearts memories of the Vidilakas’ passion for receiving His Word in their language. They were still eagerly waiting. How could we leave? Were there ways to serve them from a distance?

Almost immediately God began to reveal His answers to our prayers. We located Luka, a young Vidilaka man who was attending a university in our new location. His excitement at meeting us grew when he learned about our work. “I’ve heard that there are books in my language. But where are they? And how can I learn to read them?” Although he could read English, he had never had the opportunity to learn to read his own language. He eagerly accepted our offer to teach him.

Progress during the first week of lessons was understandably slow. But during the second week we had the joy of seeing Luka’s eyes light up as he began to read his language fluently for the first time. We started with our draft of the book of John, which he read voraciously. Whenever we were doing other work together, I observed him gazing intently at our small assortment of Vidilaka books, enjoying the sight of them and the knowledge that he could now read them. His passion for his people to be able to read the Bible grew stronger.

Luka told us about the refugee camp where his family lived. He wanted to start reading groups for them and the several hundred other Vidilaka people who lived there.

A displaced Vidilaka pastor took up the call and started several reading groups among the refugees. They read through the entire draft of John. The pastor took notes on wording that wasn’t clear to the people, which he later reviewed with Sean. The gospel of John is now one step closer to publication. We could see God’s purposes moving forward despite the haze of so much uncertainty for the refugees, their homeland, and our own future.

We have also maintained phone contact with Silas, our national co-translator, who did not evacuate. Although war had driven us and many Vidilaka out of the country, Silas had remained to serve his family and his community.

Silas has been pursuing the dream of translating the Bible into his own language for nearly three decades. His community chose him to become a translator back in 1985, and he pursued education in a major city to prepare for the task. He worked on the translation until political unrest brought it to a halt. In 2005 he began working anew on the project with Pioneer Bible Translators, and by 2016 we had published some of the first materials in his language: a reading primer, a story book, a song book, and the books of Matthew, Mark, Acts, James, and 1 John. 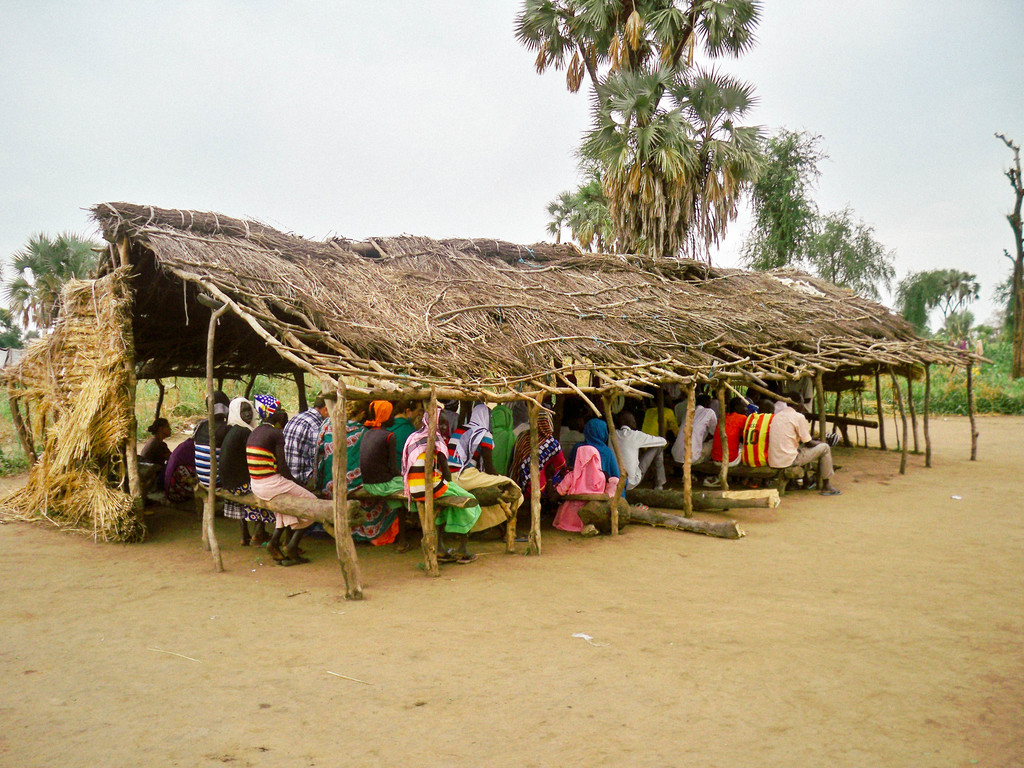 God is providing His Word and growing His Church among refugees of civil war in North Africa.

In our phone conversations Silas shared devastating news with us. Many people had been killed at random, including one of our close friends. Proper burial was difficult given the insecurity. People were starving. Yet despite the lack of food and the constant threat of random gunfire, Silas continued to teach in a local school, often without pay, because he believed in building up the next generation of his community. In his spare time, Silas persevered in drafting the Scriptures for his people.

Seven months after our evacuation we arranged for Silas to fly to our new location so that we could work together to check his draft of Genesis. He told us, “Thank you for bringing me here. Now the work will not stop.” During the two weeks he was with us we checked nearly half of Genesis and also updated a book of hymns in the Vidilaka language. Through a sermon Silas heard while here he received clear assurance that God Himself had chosen him to do the work of Bible translation for his people. He did not need to worry, but should press on with the task. Despite the volatility of his homeland, he continues to live among his people as he slowly labors to bring them God’s Word in their own language.

There is plenty of haze from all of the tragedy and loss in this part of the world. Many days it obscures the beautiful mountain of God’s plan for the Vidilaka people, but the passion of Luka and the faithfulness of Silas help us to glimpse it again. Silas is drafting Scripture. Reading groups in the refugee camp are encountering and being transformed by it even while they improve the translation. As we coordinate these efforts, we see God’s Word reaching the Vidilaka people.

At the refugee camp, Sean and I sat in a mud-walled, tin-roofed church building with local leaders who had started this congregation for the refugees. We told them how we had fled our home with nothing and that God had led us to the refugee camp to continue the work. “How did you find us?” they asked. “We are so far from home. It’s a miracle from God that you came here!” They begged us for Bibles, literacy primers, songbooks, anything that was available. God had led us to a community to serve.

“In this world we are all refugees until we are called home,” the pastor told us. “Why shouldn’t we teach our children and build our lives where God has put us right now?”

For a moment the haze clears, and I can see the mountain.