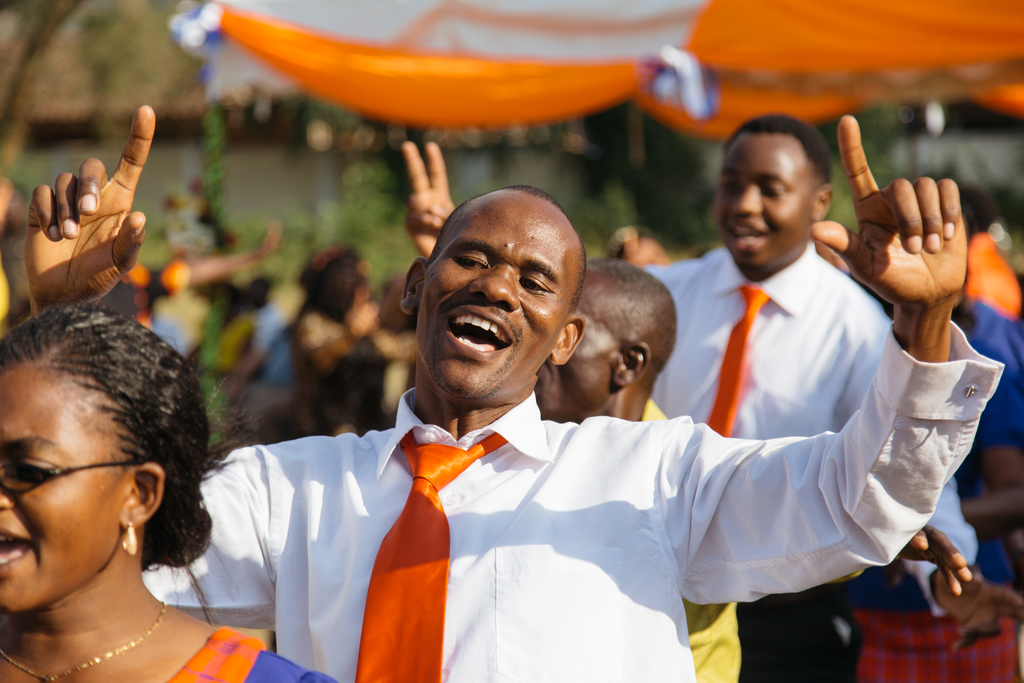 East African Bible translators dance in celebration at the dedication of the New Testaments they translated.

Ten years ago a small team of missionaries was praying for a solution to the needs of Bibleless people groups in East Africa. God gave them a vision to form and equip teams of mother-tongue translators to work in several related languages at the same time.

Murmurs of anticipation filled the air as the honored guest lifted the lid from the ornate package, revealing six New Testaments. As he held the books aloft for all to see, the crowd erupted in joyful thanksgiving.

September 6, 2015, was an unprecedented day in the history of Bible translation. On this day, New Testaments in the heart languages of six people groups, many with accompanying audio versions and the JESUS Film, were dedicated in East Africa. Never before had Pioneer Bible Translators presented Scripture resources in this many languages and formats simultaneously. Together the materials have the potential to reach 2.5 million people.

Rewind the clock ten years. A small team of missionaries was praying for a solution to the needs of the 125 language groups in this East African nation. God gave them a vision for forming and equipping teams of mother-tongue translators to work concurrently in each of ten related languages. In their own towns and villages, the teams would all translate the same portion of the New Testament. Then they would assemble at Pioneer Bible Translators’ office in East Africa to review, discuss, and correct their work with the assistance of translation advisors and consultants. This strategy, known as the “cluster approach,” is well suited to this area and to other places where Bibleless people groups speak closely related languages. 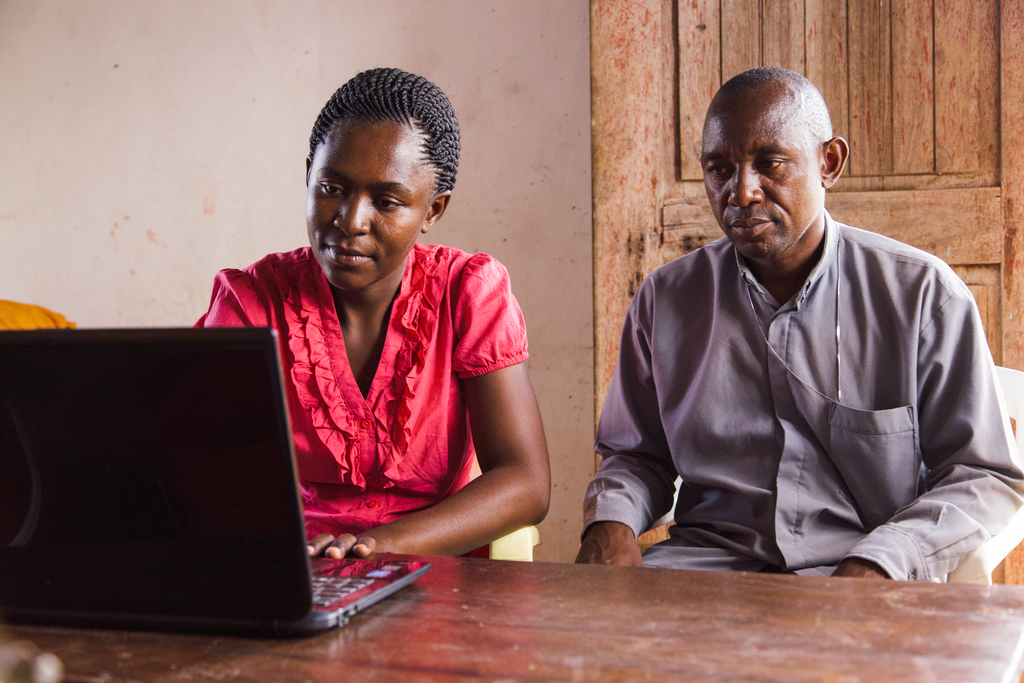 This team and others who have completed the New Testament are now translating the Old Testament.

Each time the translation teams came together to check newly translated Scripture, they shared stories of both hardships and victories—the many physical difficulties they faced, and God’s continual intervention to keep them going. They discussed the challenges of finding the best ways to convey concepts like “grace” and “righteousness” in their languages. Together they worshiped God, and together they learned from the Scriptures. They also learned from each other, encouraged one another, and returned to their home areas with renewed vision and confidence to continue their translation work.

When the last verses had been translated and checked, the completed New Testaments were sent to be typeset and printed. Now the much-anticipated day had come. New Testaments in six of the ten languages had arrived, and it was time to dedicate them for God’s glory and begin distributing them. Plans were in place. A prestigious venue—the city’s largest soccer stadium—was secured, and visitors representing numerous organizations arrived from several countries.

The day before this historic event, the plans took an unexpected turn. The stadium booking was canceled to make way for a previously unscheduled political rally. Yet this significant disruption did not stop the festivities. Miraculously, God provided a new site, one that showcased His creative handiwork rather than the work of human builders. Teams of volunteers scrambled to acquire seating, a stage, tents, and sound equipment while others hurriedly made signs and secured radio interviews to advertise the new location. The dedication began on time in the new venue. 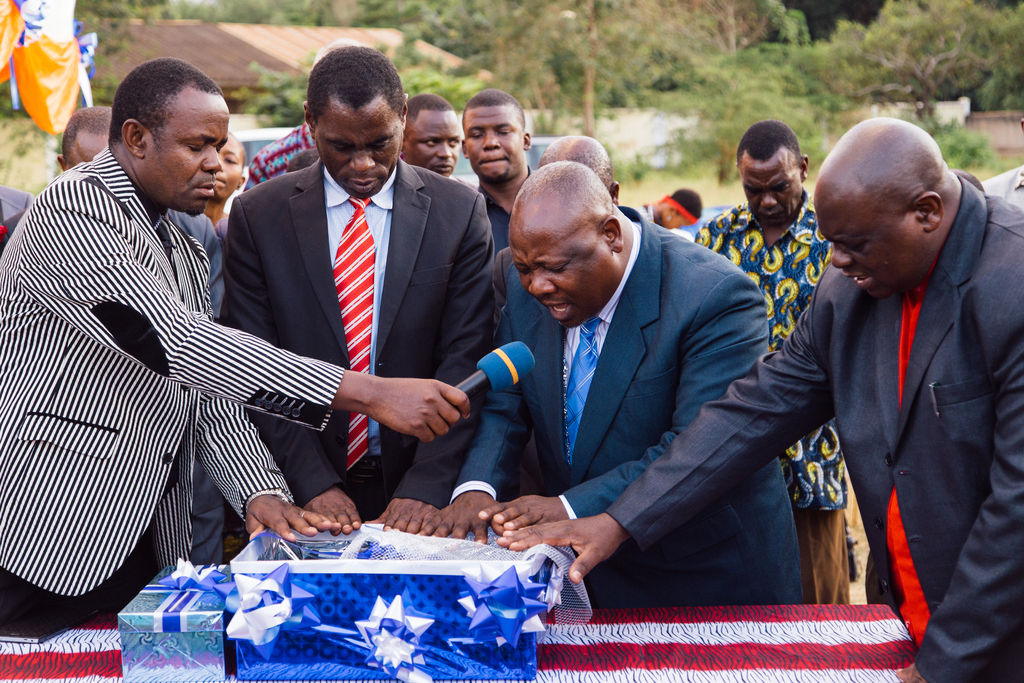 Church leaders and the country’s former Deputy Speaker of Parliament pray over the New Testaments.

Singing filled the air as people began to gather. The atmosphere of praise and gratitude continued throughout the entire five-hour celebration. Choirs and soloists energetically sang and danced before the Lord. A renowned drama troupe presented an inspiring interpretation of the Bible translation process. Spontaneous conga lines formed in celebration of the hard work and commitment of the translation teams. The translators themselves even formed a conga line, the joy on their faces and the movement of their bodies reflecting their gratitude for God’s faithfulness to them through their years of labor. Distinguished guests from around the world, including Pioneer Bible Translators’ president Greg Pruett, delivered convicting speeches that exhorted the recipients of these heart-language New Testaments to use them to draw near to God and to bring others into fellowship with Him.

Pioneer Bible Translators did not accomplish this momentous feat alone. God raised up the teams of African men and women who worked on each translation. He also provided partner organizations to come alongside our team to translate dream into reality. The Word for The World provided assistance in the translation process. The Seed Company provided funding. Davar Partners International, Faith Comes By Hearing, and TheoVision were involved in producing the audio versions of each translation. And The JESUS Film Project produced their two-hour docudrama about the life of Christ, based on the Gospel of Luke, in each language.

As memorable and invigorating as this day was, the formal presentation of these Scriptures served primarily as a springboard for the next stage: distributing them throughout the cities, towns, and villages where these languages are spoken. This spreading of God’s Word is already bearing beautiful fruit in the form of transformed lives through God’s Word in six—soon to be ten—heart languages in East Africa.