Some Serve in Distant Places Because Others Serve by Sending Them 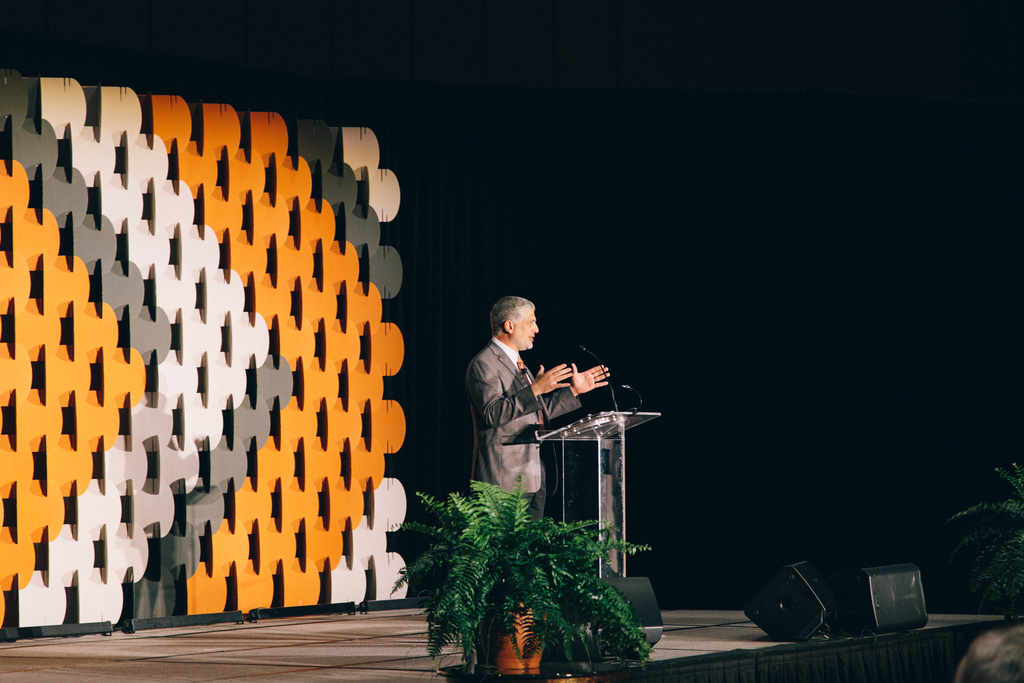 Greg Pruett, president of Pioneer Bible Translators, speaks at a fundraising event, introducing Bible translation and inviting the guests into prayer and financial partnership in our ministry.

From their suburban home in Arkansas, Russell and Jessica Shaffer gave a West African people group the book of James in their own language.

“I was taken by how vast the need for Bible translation is around the world,” Russell said.

Later, they received the news that their gift was being used to fund the translation and publication of the book of James for a people group in West Africa.

Not everyone can leave home to serve in distant places, Russell observed, but every Christian has a role in fulfilling the Great Commission. “Though we ourselves are not goers, we feel a sense of satisfaction that we are senders. We are being faithful to the task to which the Lord has called us.”

“We like the idea of being ‘giving missionaries.’ We can’t go to other countries, but the money certainly can.”

Hank Daughtry, a retired businessman and a member of Pioneer Bible Translators’ Board of Directors, has known Pioneer Bible Translators’ president Greg Pruett for decades. One day when Greg was very young, he pulled Hank aside and notified him of a shocking life change: he wanted to leave the United States and become a missionary in a part of the world dominated by another religion.

“This was in 1980, during the Iranian hostage situation,” Hank recalled. “Tensions were high. A lot of inflammatory things were being said. I was amazed that Greg would want to do that.”

Impressed with Greg’s personality and his work ethic from an early age, Hank chose to support his ministry. The relationship between Hank and Greg grew stronger as Hank’s partnership brought him into the world of Bible translation. Greg’s reports detailed the challenges and joys of his ministry in West Africa—fascinating information for those unable to work overseas.

One time Greg asked Hank for funds to plant 10,000 fruit trees to improve the nutrition and the economy of the community in which he was serving. The religious leader in his village had told him, “When you came we were burning our trees to clear fields for planting, but you taught us how to plant good trees.”

“I think this is a metaphor for Bible translation,” Hank said. The spiritual fruit provided by heart-language Scripture is long-lasting, and its roots grow deep. The presence of God’s Word impacts an entire community.

“Bible translation is essential for people who don’t have the Bible in their language or don’t have an accurate concept of God,” Hank said. He added that sometimes the Bible is one of the few books that a people group will ever receive in their heart language. Giving it to them is worth the cost, he believes, quoting the words of missionary martyr Jim Elliot: “He is no fool to give what he cannot keep to gain what he cannot lose.”

A Dallas-area couple who have partnered with several Pioneer Bible Translators missionaries for ten years likened their role to that of a missionary. In the husband’s words, “We like the idea of being ‘giving missionaries.’ We can’t go to other countries, but the money certainly can. We feel like we’re right there with them. It is a team effort. We are all stewards of what we have.”

These men and women represent thousands who give sacrificially on behalf of the unreached people that God has called Pioneer Bible Translators to serve. Some give large gifts in response to specific requests; others give regularly in support of specific missionaries and projects. Many give in both ways. Together their gifts provide about half of the funds that Pioneer Bible Translators receives each year. The other half comes primarily from churches, some of whom have partnered in this ministry from its earliest days, and from foundations, businesses, and other organizations.

The ministry of Pioneer Bible Translators requires missionaries who are willing to go, prayer warriors who uphold them in prayer, and financial donors who provide needed resources. Standing together in partnership, each fills a vital role in fulfilling the vision of transformed lives through God’s Word in every language.