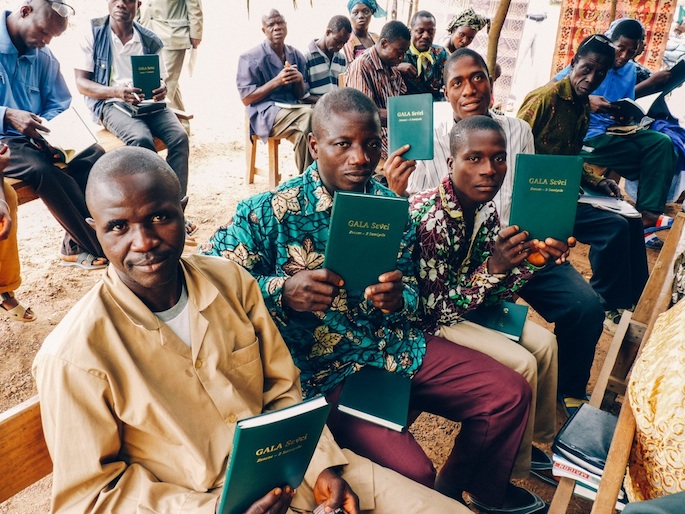 The line snaked around hand-hewn wooden benches under the canopy of palm fronds. Toma Christians waited patiently in line to buy their copy of newly published Scripture in their language. Twenty minutes later, there were still people in line. Over the three days of ceremonies related to the dedication of Genesis-2 Samuel, over two-thirds of the 1,000 available copies sold, demonstrating a hunger for God’s Word that surpassed the expectations of even the Toma church leaders.

During the dedication service, representatives from several Toma Scripture reading groups that have been meeting over the last year shared testimonies of the impact of having Scripture in their heart language.

One Toma Christian shared, “I testify that this Word has truly helped me in resolving my problems. Now, whenever I am confronted with a problem, I spend time alone with the Word of God. Through it, the Lord gives me counsel for my problem.” 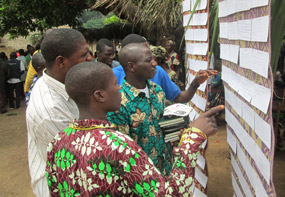 Over 150 notecards of blessings that many of you sent were also presented. As your words of congratulations, encouragement and blessing were interpreted in Toma, responses of “Amen” rose from the audience; and the display of cards attracted large crowds during the breaks.

A tailor rejoiced, “I can now read the Word of God directly in my language. I no longer have the need to consult a dictionary to look up the definition of a word that I don’t understand” [in French].

After reading through the book of Acts, a youth leader shared, “This study has greatly helped me in my role as youth leader of my church. By the grace of God, it has allowed me to do a good job of organizing the young people’s ministry, and to find a mission field—to send the Word of God to others who are not yet Christians.”

Beaming faces and bowed heads of intent readers were common sights after the dedication. Sights which you have made possible with your gift, as expressed by one Toma church leader, “I thank you for this book, which helps us to understand clearly the Word of God in our language.”