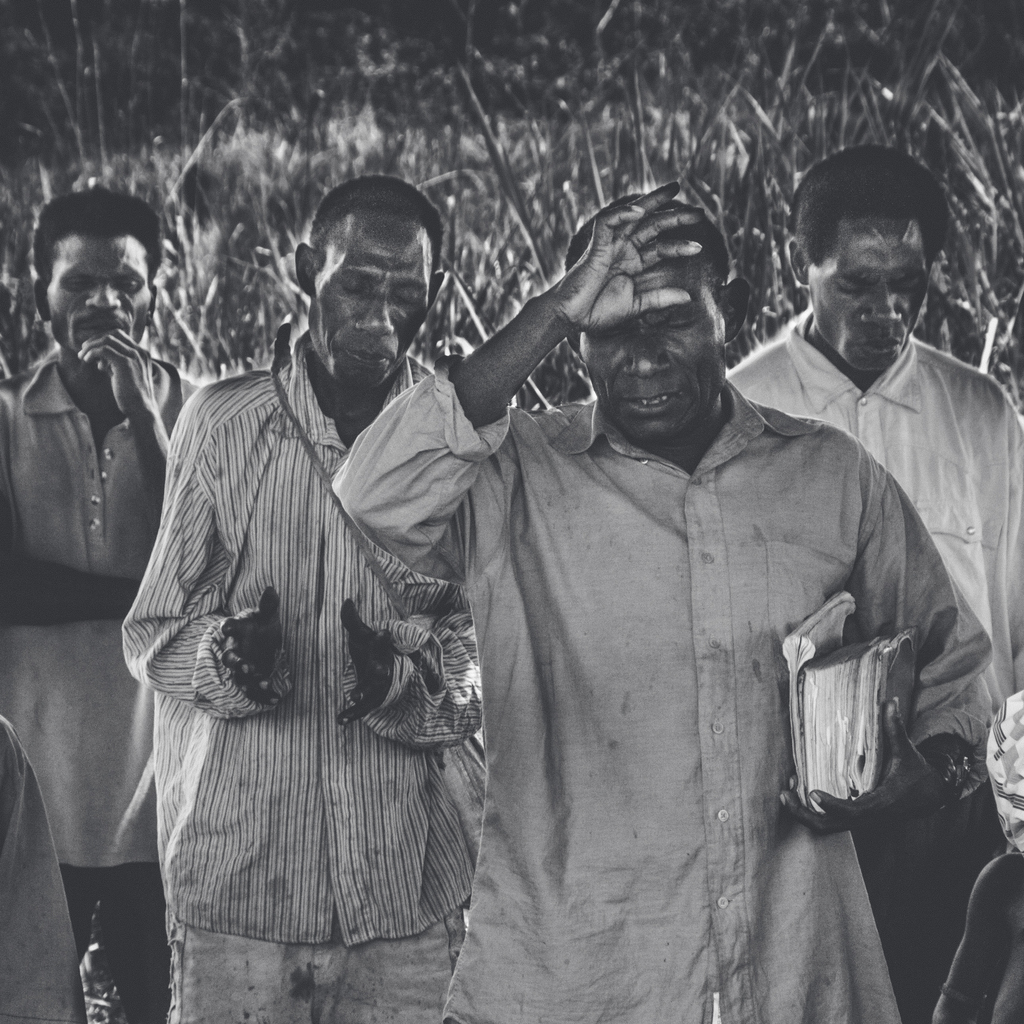 I knew something was up. A friend had hinted the day before that this might happen. He warned me not to be afraid, but to enjoy the experience quietly.

It was a cool morning on the slopes of Mount Somau, in the foothills of the Finisterre Mountains of Papua New Guinea. A blush of dawn tinted the eastern horizon and fog flowed through the valley below like a great river. I heard murmuring in the nearby jungle and the shuffling of scores of feet.

While my two young sons slept at the far end of our  12’ by 20’ house and my pregnant wife Angela dozed beside me, I fought the urge to bolt to the window to see what was going on. Instead, I lay still, listening. The rustling noise moved from one side of the house to another, then another, eventually circling it completely. The murmurs I’d heard earlier became a gentle cadence of words offered heavenward. Now and then I could decipher snatches of their prayers. “O God … heal … overcome.” Tears welled up in my eyes as I began to send my own prayers heavenward.

For some time my health had been failing at the hands of some unknown enemy that was stealing my strength, my ability to think, even my basic ability to help Angela with chores. And now a score of Somau Garia speakers were encircling my family in prayer for my healing. I knew in that moment that deep and thoroughgoing transformation, the kind that comes from having access to the Bible in the language of the heart, was a real probability.

Angela and I had answered the call to live in this place, learn the people’s language and culture, and facilitate Bible translation for them. Joy and sorrow mixed in the crucible of daily life in the jungle. Our area, like most others throughout this beautiful country, faced numerous seemingly insurmountable challenges. Vehicles passing on the road connecting the Highlands to the coast were robbed regularly near our village. Adultery and fornication were dealt with swiftly and severely—sometimes with the offender meeting a violent end as a jealous husband used the point of a knife to mitigate his shame. Many of my friends died of treatable diseases like tuberculosis or pneumonia because local “healers” demanded that sick people throw away their Western medicine and instead participate in rituals to appease ancestral spirits or offended bush deities. We often felt helpless to bring about any real change here. In our helplessness we prayed, pleading with God to bring about transformation of even the most hardened hearts.

We also savored many moments of joy as we lived among the Somau Garia people. Angela was invited to name the daughter of her closest friend, a deep honor here. When our sons were toddlers they would wander down the hill first thing in the morning to nestle under the arm of their second “mother” and eat breakfast straight out of the fire. I often went off into the jungle or to distant villages with the men who would later be my co-workers in translation. From them I learned how to sing Garia songs, how the local sense of humor worked (very important), and how to show proper respect (even more important). Feasts, childbirths, sports and service brought much joy to our hearts.

Where can these missing moments be found? In the sixty-three pages of the Somau Garia translation of Mark. When the Somau Garia translators read from the pages of the book that they had a hand in translating, they remember. Memories of long nights and sorrowful funerals and renewed life flood their hearts. Their memories, like so many other things in Somau Garia culture, become community property when these men tell the story. Reading the text of Mark, they also tell of how it was translated. They relive the moments that changed their hearts toward God or traditional beliefs or outsiders like Angela and me.

Bible translation, even the process of it, is transformative. And living incarnationally among those God has called us to serve is transformative. While the Word transcends culture and time and space, God still uses His people to preach and teach and exhort and encourage. God used a small group of Somau Garia people to pray for and encourage me at a time when I thought my missionary career might be over, lying there in bed, sick and despairing. He also used my family and me to extend hope to people desperate for His Word.