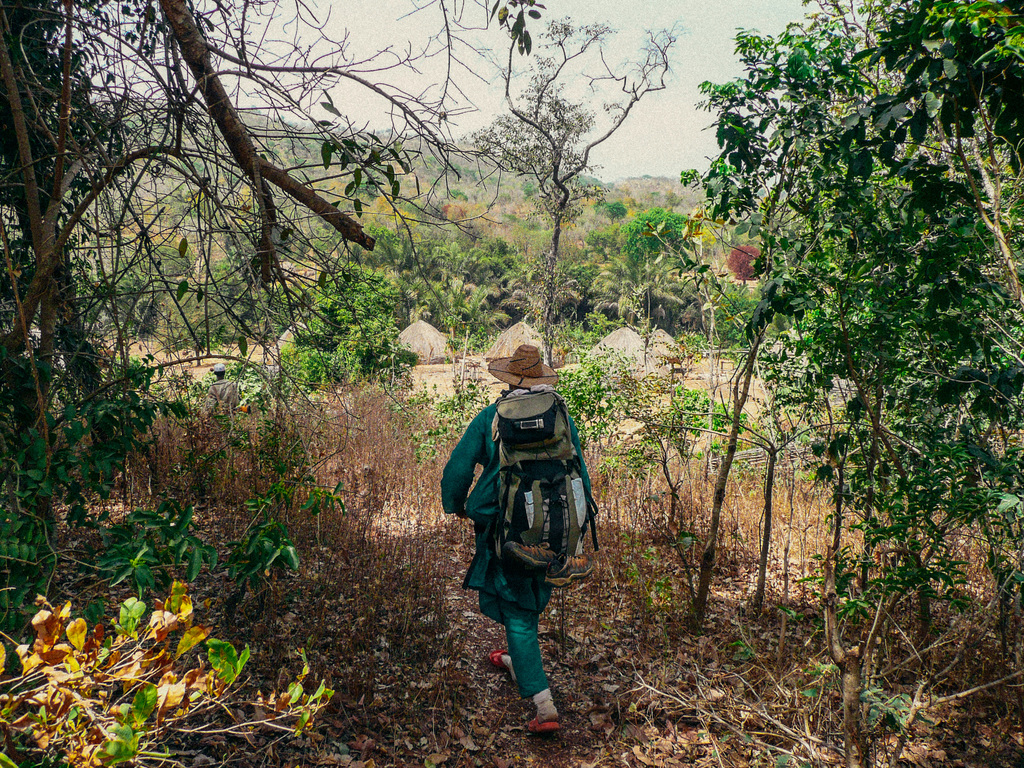 “I have walked since early this morning because I heard you have books with a message from God in my language.”

As the old man stopped to catch his breath, we stared at him, dumbfounded. He had walked how long to get God’s Word?

For six days my teammates and I had been trekking in the African bush. Along the way we had passed through lush tropical forests, barren moonscapes of giant termite mounds as far as the eye could see, and huge plateaus of tall amber savanna grasses inhabited by warthogs and other wild animals.

This trek was the most physically demanding thing I had ever done, radically different from my typical five-mile hikes back home in the Smoky Mountains. We had hiked 80 miles in 100+ degree heat, carrying 50 pounds of Scripture on our backs—and little else besides a water filter. We had stopped in every village along our path. In each one we had offered the people Scripture in Dimabu, their heart language.

We were the first Christians that these villagers had ever met. We were also the first to offer them access to God’s Word in their own language. Until we walked into their villages, the only holy writings they had heard were written incomprehensibly in a foreign language.

Pioneer Bible Translators serves some of the world’s most spiritually impoverished people. We want everyone to be able to hear the accounts of God’s dealings with His people. We want them to come to know God as a loving, compassionate Father, and we want them to encounter and embrace His Son Jesus personally. And we know that they will hear and understand best if the message comes to them in a language that speaks to their hearts.

Some of our missionaries have invested many years in the arduous task of translating God’s Word for the four million West Africans who speak this beautiful Dimabu language. But translating these words is not enough. They must get into Dimabu hands. That is no simple task. The dominant religion persecutes. The handful of churches in this area are tiny, with few resources. Harsh terrain challenges efforts to access the thousands of communities where Dimabu is spoken. The majority of these communities can only be reached on foot. Going there is a job for trekkers.

Carrying backpacks stuffed with Scripture, trekkers follow the same principles Jesus laid out when He dispatched His first-century followers to spread the Good News of the Kingdom. “Take nothing for the journey . . . no bread, no bag, no money” (Mark 6:7).

That is how we had spent the past six days. We had distributed hundreds of portions of Scripture. We had seen God work in incredible ways. We had dialogued with village leaders, religious teachers and countless villagers. Now it was time to depart.

A vehicle was waiting to take us back to our home base. We loaded our backpacks into it and were saying our final goodbyes when one of us spotted the old man walking briskly toward us, clad in a traditional head-to-toe embroidered tunic and wearing a hat that marked him as a devout member of the dominant religion here.

“Who is this man, and why is he in such a hurry?” we wondered as, seeing that we were about to drive off, he quickened his pace.

When at last we stood face to face, he introduced himself as Suleiman. Yesterday, he related, a traveler had passed through his village, a far-off place beyond the route of our trek. The traveler had told him of strange people who had God’s Word in the Dimabu language. So early this morning, without reservation and with nothing but the tunic on his back, Suleiman had resolutely started his own trek in search of these strangers and the Scriptures they possessed.

His resolve to find us was tested repeatedly. Trekking through the bush, he arrived at village after village, only to be told in each one that we were no longer there.

Now, only minutes before we drove away, and six long hours after he left home that morning, Suleiman arrived—just in time. God’s timing was impeccable!

God rewarded Suleiman for his perseverance. He left us with his hands full of Scripture books in his language. We left him with our hearts full of encouragement at the hunger for God and for His Word that we had just witnessed.

Trekking overcomes some of the physical obstacles to distributing God’s Word to the people who speak Suleiman’s language. And it is this Word that will overcome spiritual obstacles, transform lives and grow and mature Christ’s Church. As God’s Word continues to spread far and wide among Suleiman’s people, we are excited to see the fruit of transformed lives as His Word pierces the hearts of many. We eagerly await a rich harvest.