What is a Jesus?

There are still places on Earth where no one has ever heard of Jesus. 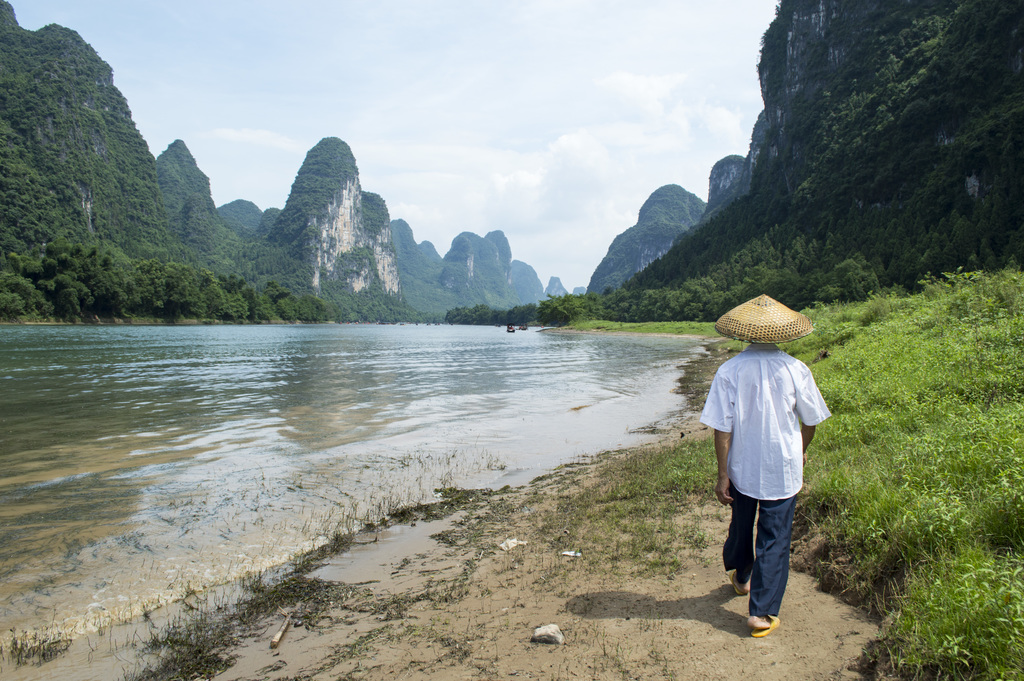 It’s easy to assume that everyone’s already heard since the Church has been doing mission work for 2,000 years now. It’s logical to think, “In this age of the internet, radio, cell phones, and television, surely everyone has at least gotten the message that Jesus exists.” But they haven’t. There still are places in the world where people have never even heard of Him.

My colleague works in one such place, introducing people to Jesus for the first time. As he travels around and meets people, he starts conversations and then asks, “Hey, have you ever heard of Jesus?” Scrunched-up eyebrows and quizzical expressions accompany their answers: “No, what is a Jesus?” “No, not at all.” My friend seizes the opportunity by explaining, “Jesus isn’t a ‘what.’ He’s a person. He’s the Son of God….” I had heard about these encounters, but I needed to go see my friend’s ministry for myself. I wanted to personally experience this region full of people completely unaware of Jesus.

ISAW IT FIRST IN A restaurant. We were eating with a man we had just met and my friend asked The Question: “Have you ever heard of Jesus?” He hadn’t. It soon became clear that he wasn’t interested in hearing any details about an obscure man named Jesus. But he did tell us about a nearby temple where we could make sacrifices in order to have good luck.

We visited another community and watched a big celebration and a sacrifice. For over 400 years the people in this village have worshiped a spirit that inhabits a particular tree. Not surprisingly, the people here responded to my friend’s question the same way. They had never heard of Jesus. They invited us to eat with them. While we ate they talked enthusiastically about their local deity.

As we traveled, we toured neatly organized towns and the most picturesque villages I’ve ever seen. Each place we went, we prayed earnestly for God to bring His Word to the local people in the language they understand best. We prayed that He would make Himself known in a way that might transform each life beautifully.  As I watched the breathtaking scenery go by, time and again I found myself excitedly pointing out the window and asking my teammates, “Did you see that?” “Have you ever seen anything so beautiful?” This was no impoverished nation. I was stunned by the intricate agriculture—lush, irrigated fields flourishing with crops of leafy vegetables that I did not recognize. The people had their own unique system of technologies that looked to my Texan eyes to be miniaturized in every case: smaller roads, shrunken tractors, miniature trucks—all efficiently producing an abundance I never could have imagined.

Driving through the countryside praying one day, we looked up and noticed a village high above us on a bluff overlooking a sweeping, verdant valley. We sensed the Lord urging us to pray for that village in particular. So we swerved off the highway and up a dizzyingly steep slope on a narrow, concrete roadway full of treacherous switchbacks. We found a little parking lot and a grouping of gorgeous houses. A cluster of eight elderly spectators—four men and four women—stood on the bluff staring out at the dramatic view of the valley. My friend and I wandered over and, as he struck up a conversation with the men, I had the impression that watching the countryside was their major task for the day. One of the men said he was 89 years old.

After we had talked with this group for a little while, a van full of local people pulled into the parking lot.  One of the passengers, obviously curious, walked toward us and stood behind her elders to hear what we were talking about. At that moment, my friend asked The Question, “Hey, do you guys know about Jesus?” They looked a little surprised, but soon recovered. Thinking we had misspoken their language, they started helpfully suggesting other words we might have meant that rhymed with “Jesus” or at least sounded vaguely like it. “No,” he persisted, “I’m talking about a man named Jesus….”

All of a sudden, I stopped watching the old men as the face of the newly arrived younger woman lit up with recognition. She said, “There is one person in this village who follows Jesus. It’s me!” We exchanged dubious glances as my friend translated her words for me. He turned to ask her about Jesus. Her face tensed in concentration as she began to sing a song from distant memory. “Jesus died for our sins….” The words came out with ease now as the song came to the surface of her mind. Here on the top of this hill was a lonely believer. “My brother has taken three different Bibles away from me,” she railed bitterly as she listed her trials as the sole Christian in her community. We spoke words of encouragement to her, prayed for her, and gave her money to buy another Bible in the national language. She gave us a big hug before we drove away.

What if that was you? Imagine what your life would be like if you were the solitary follower of Jesus living in a remote place where few have even heard His name. Would you stay faithful up there on that hill like this woman, with your family confiscating your Bibles to dissuade you from your embarrassing faith in an unknown man? How can we leave that woman out there all alone? It’s unthinkable. It’s not right. The words of Jesus present a stinging challenge, and always will, until someone climbs that hill again: “Go into all the world and preach the Good News to all creation. Whoever believes and is baptized will be saved, but whoever does not believe will be condemned” (Mark 16:15-16). 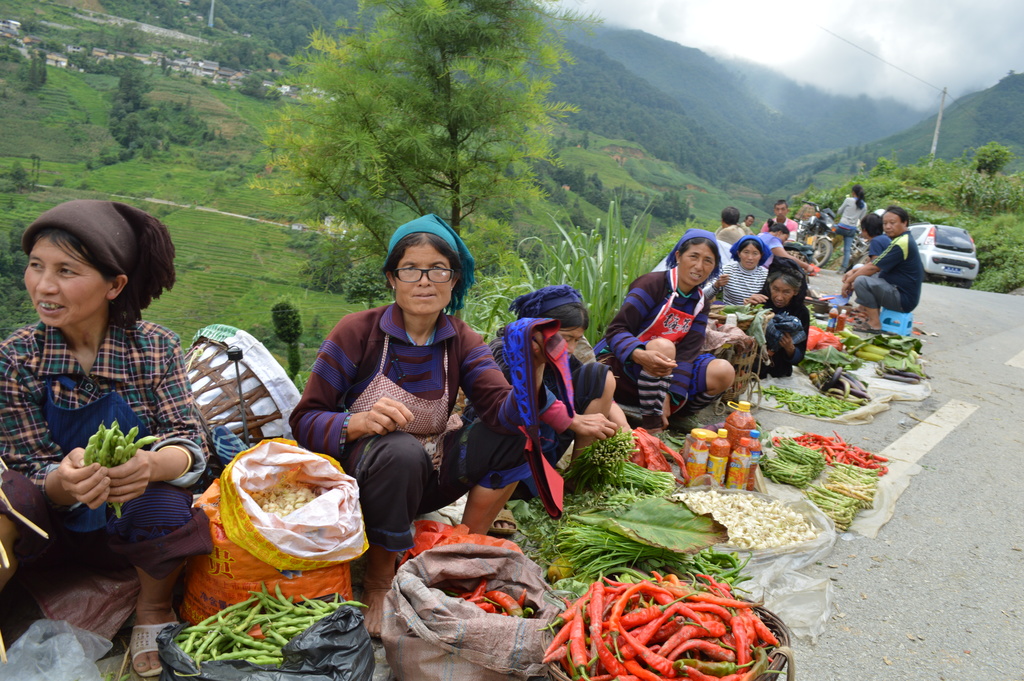 Merchant women set up shop outside a mountain village in Asia. Have they heard of Jesus?

“DURING THIS TRIP GOD SHOWED
me in new ways how deeply He cares for the Bibleless people who live here. I was praying while drifting through a village market reflecting on the likelihood that no one I was seeing in all that crowded market had ever heard of Jesus. I was troubled that I didn’t feel any intense concern for the people there. “Shouldn’t I feel what Jesus felt for these men and women?” I pondered. Jesus chose to die for them. The thought would not leave me in peace. And yet I felt nothing. As I watched an endless stream of shoppers walk by, I asked God earnestly, “Why don’t I feel Your concern for these people?”

Then I noticed that a group of the most adorable children had begun to follow us shyly as we headed toward an outdoor restaurant for lunch. They were just the age to be curious enough to approach us, yet not old enough to be inhibited and aloof. As soon as I saw them, my heart swelled with love. They were precious. “Where are you from?” they probed. My friend began to explain our group to them in their language. Hearing that we were from the United States, they asked to see examples of our currency. When one of us whipped out a dollar, they all exclaimed their astonishment, “Wa!”  When they asked whose picture was on it and heard that it was George Washington, the same sound rushed out of their mouths involuntarily, “Wa!”

Even though I didn’t understand the language, I sensed that my friend was steering the conversation around to The Question. A sharp pang tore at my heart. It felt like watching a wreck in slow motion. I couldn’t look away, but I couldn’t bear to see what happened next. I recognized the words as they came out of my friend’s mouth, “Have you ever heard of Jesus?” Their little expressions were so eager to please as their eyes looked up to him shining with hope. But then they processed the question and a look of uncertainty flashed across their faces. They began shooting querying glances at each other while trying to maintain an air of confidence. They wanted so much to please us by knowing the answer to the question, but gradually every head began to shake back and forth. “No, not at all. What is a Jesus?” The tragedy of their answer crushed me. I staggered over to the table where our team was and sat down. Overwhelmed with a devastating grief, I began to weep. No, my heart cried. Not them, too. Not these children. Jesus had died for them, but they had no idea who He is. I fought to regain my composure and remain discreet, but the pain was too great. I wanted to fall face down on the concrete floor and wail.

A thought came fully formed into my mind: “You love these little ones because they are children. I love all of these people because I was there when they were born. They are all children to me. The way you feel about these little ones is the way I feel about everyone.” God had given me a small window into His sense of grief and loss when millions of people stumble through life with no knowledge of His Word or His purpose for them. 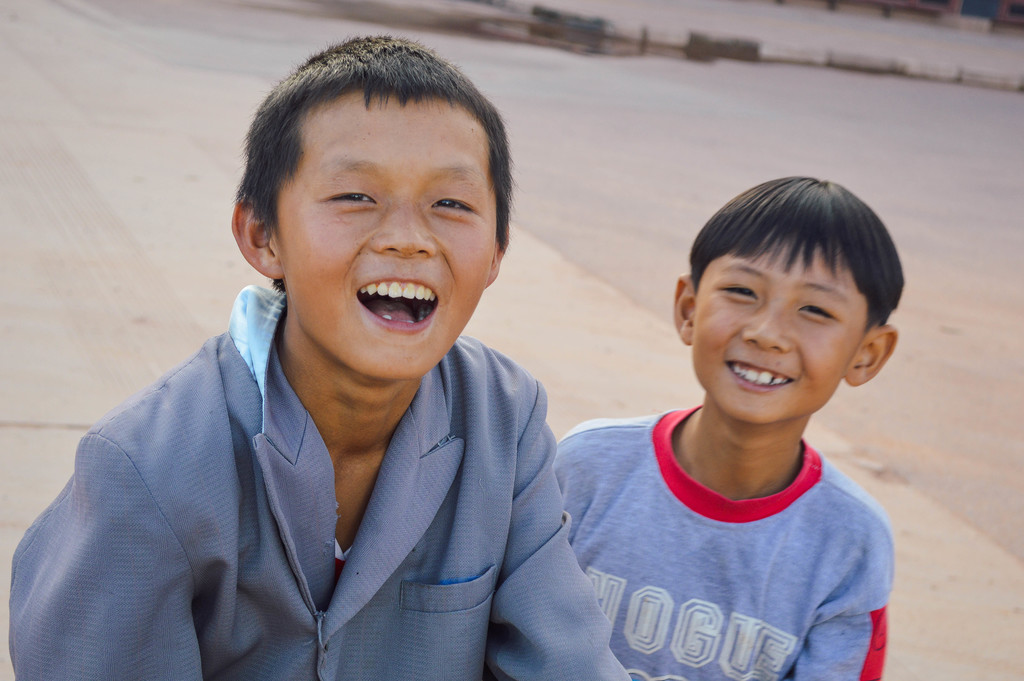 THE BIBLELESS PEOPLES OF THE earth have no way to access the transforming power of God’s Word. Jesus said, “I am sending you to them to open their eyes and turn them from darkness to light, and from the power of Satan to God, so that they may receive forgiveness of sins and a place among those who are sanctified by faith in me” (Acts 26:16-18). People who don’t know Jesus aren’t just ill-informed; Jesus says they walk in darkness under the power of Satan. They need to have the opportunity to know the same forgiveness that Jesus has shown us, to have the power that only Jesus can give to live a holy life.

Maybe you didn’t know. Maybe you are like so many others I meet who assume that everyone has already had a chance to hear about Jesus. It’s not that you don’t care, it’s just that you weren’t aware. But now you do know. Now you have seen that your brothers and sisters are out there in need. Two thousand years ago Jesus commissioned you and me to make disciples of all nations, and it’s just not okay that today there are still people who are totally unaware that He exists. That’s my responsibility, and it’s yours too. I’m not going to sit idly by as people live their lives without knowledge of God and His Word. And I think you won’t either.

I believe that now is the time, and that ours is the generation that will finally rise up and make sure that all people everywhere encounter the Word of God in their language. Won’t you disciple the Bibleless peoples of the world with us? Why not come with us on our next trip? Why not give generously on behalf of those who don’t yet know who Jesus is? Maybe God is calling you to move overseas. Perhaps you could be the first to pose that all-important question to people who still wait: “Hey, have you ever heard of Jesus?”